The Basques of the three provinces that make up The Autonomous Community of the Basque Country (Araba, Bizkaia and Gipuzkoa) are called to vote on September 25th to elect the new Basque Parliament that will produce the new Lehendakari (President of the Basque Government) and his Government. This will be the 11th legislature since the adoption of the Statute of Autonomy of Gernika in 1979. Much like the Basques from the other territories who are going through a time of great political importance (narrated on our webpage by Eguzki Urteaga in his article The Move Toward Creating a Community of the Northern Basque Country and by Aingeru Epaltza in his text The Ship of Change in the Unsettled Sea of Navarre), the Basques of these three provinces are also faced with an important challenge. 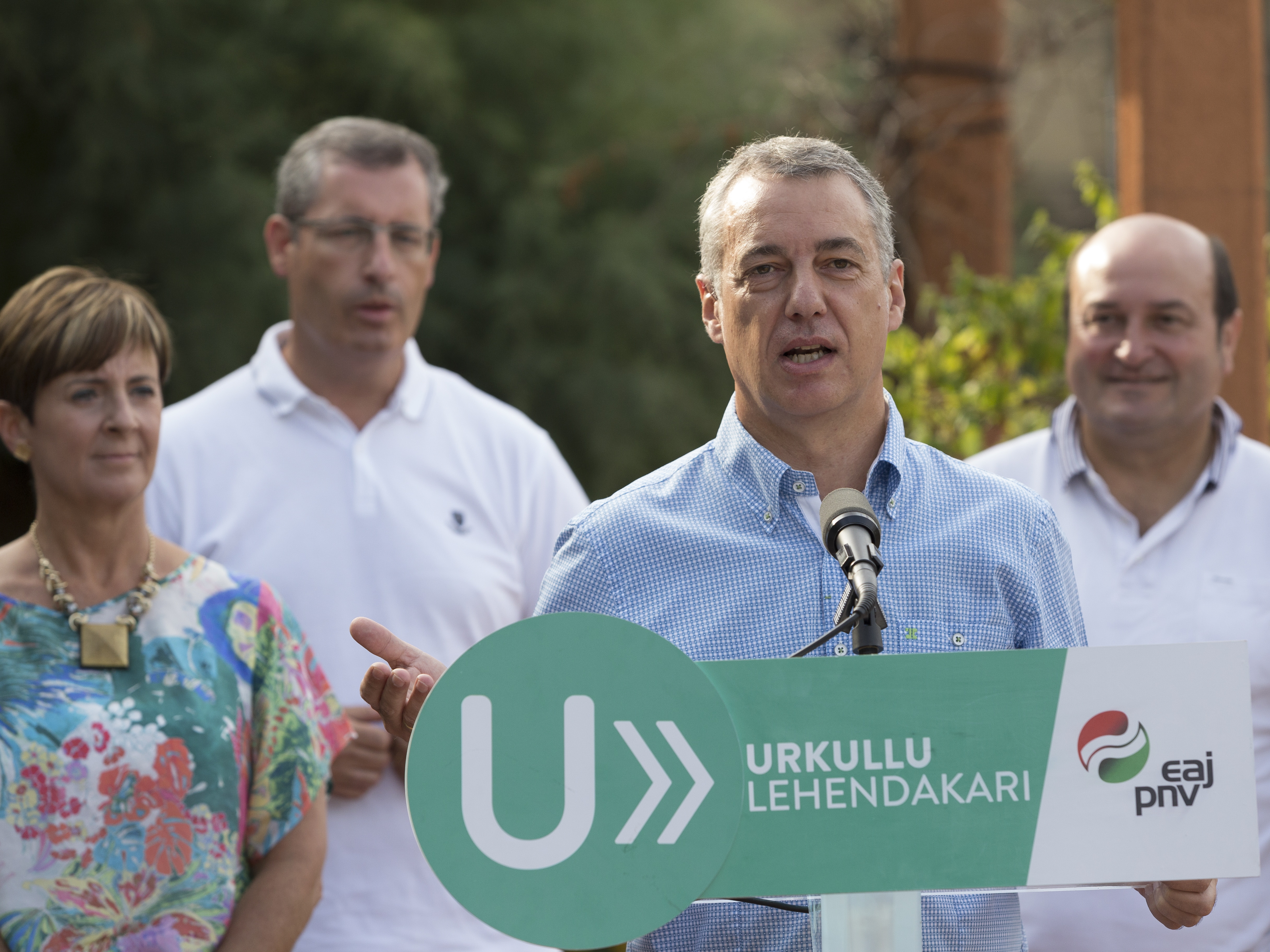 The weeks leading up to the campaign have been marked by the possibility or not of Arnaldo Otegi becoming candidate for President for the EH BIldu coalition. Otegi was released from prison last March after more than six years of a sentence that the majority of Basque citizens never understood, even large sectors that do not share the same political ideology as his. As a result of that sentence there has been a political and legal controversy about whether the ruling for his disqualification to run for office was still in effect. In the end, the Spanish Constitutional Court has ruled that his name will not appear in electoral ballots, causing disagreement again within the majority of Basque citizens and a protest movement among leading Basque figures and from people from around the world.

The majority of analysts agree in pointing out that PNV (the Basque National Party) and its candidate (the current Lehendakari) Iñigo Urkullu will win the elections. Their election results in the recent elections for Spanish Parliament, but above all in the municipal elections and the provincial governments of 2015 show a considerable electoral strength. During the electoral campaign PNV will try to show a candidate with good acceptance among citizens, four years of good management, and its capacity to make agreements with other parties and socio-economic data which, especially in comparison with what is happening in Spain, indicate that we are on the right path. In addition, PNV will continue to claim new status for the autonomous community, where bilateralism in its relations with Spain and the right for Basques to decide their own future are fundamental axes. 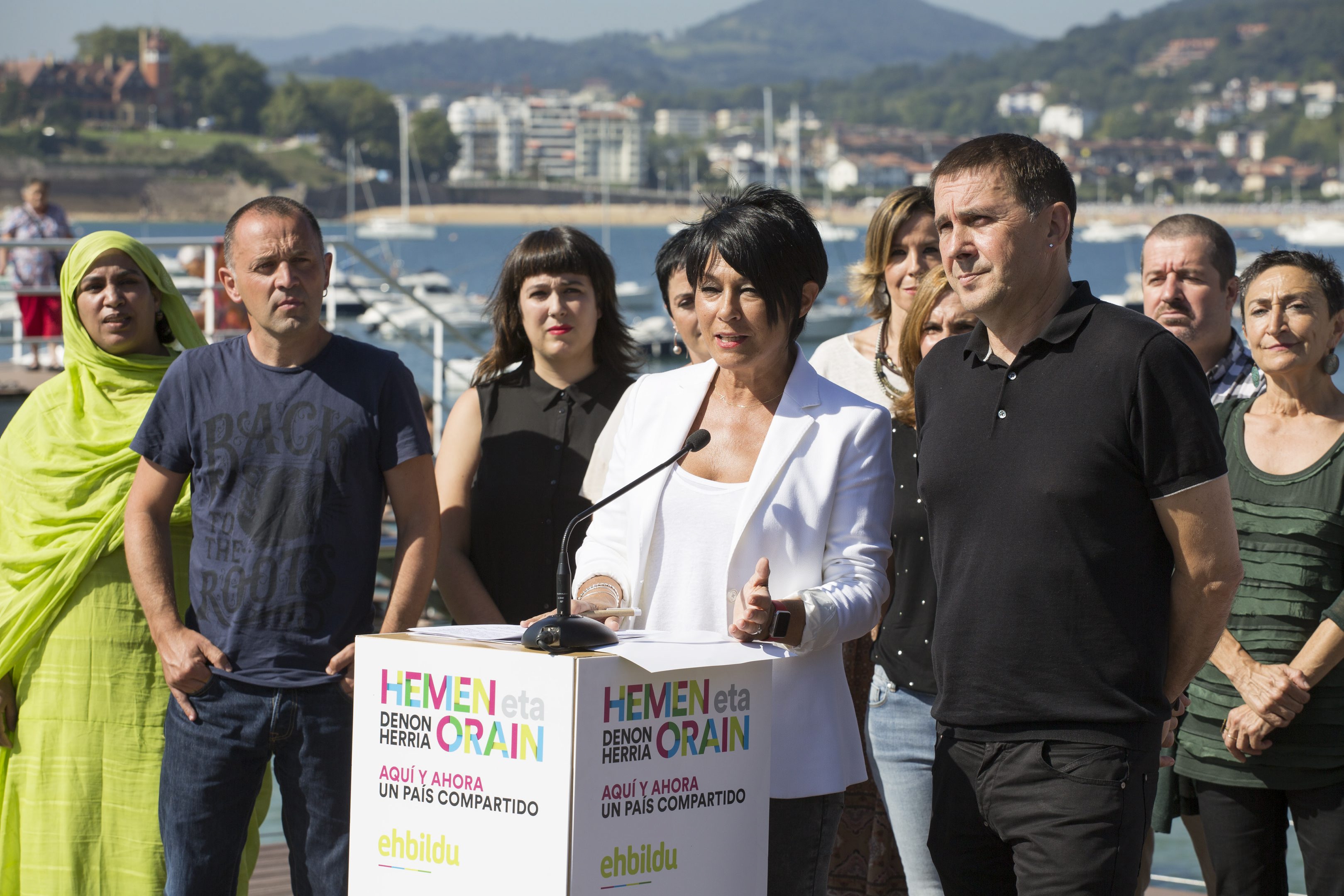 EH Bildu is a coalition of four political parties that could be framed as left pro-Independence Basque, and among them is Sortu as its main axis. Despite the disqualification of Arnaldo Otegi, its role in the campaign is very important, although also gaining weight and presence is the person who has replaced him as head of the list in Gipuzkoa, Maddalen Iriarte, a journalist well known by Basque citizens. EH Bildu will try to reverse a negative trend in the last electoral events in which it lost many votes and much institutional representation, largely (but not solely) because of the strong irruption of the political party Podemos. The left pro-Independence is trying to emphasize its social profile and at the same time urging PNV greater commitment to put in place a sovereignty process.

Podemos is the wild card in these elections. The emergence of this party has been one of the great novelties in the Spanish political landscape in recent years and in the Basque Country they were the most voted on for Spanish Parliament in the last election of June 26th, even ahead of PNV. However, the majority of analysts coincide in the thinking that an important part of that vote was for thousands and thousands of Basques whose priority was to remove the right-winged PP from the Spanish Government and saw that Podemos was the best option to achieve this. It is not clear at all if this sector of the population is going to maintain such a vote in exclusively Basque elections this time.

Podemos approaches the elections in coalition as well with other smaller parties and the announcement of their candidate for President was a surprise. Pili Zabala is the sister of an ETA militant who, in 1983, was kidnapped, tortured, murdered and buried in quicklime by GAL, a vigilante group that practiced government-sponsored terrorism at that time. During the last decades Zabala has stood out for defense of human rights and for reconciliation. Although it seems paradoxical, her novelty and freshness being one of her positive points can at the same time be her main handicap, since her lack of experience and avoiding clear answers on countless issues can cause certain distrust. What does seem clear is that, even if they fail the electoral results of the Spanish elections, the irruption of the coalition Elkarrekin Podemos in the Basque Parliament will be significant.

The Pro-Spanish parties PSE-PSOE and PP come to this election with the objective of recovering results which in the latest elections have not been good for them in the Basque Country. The Socialists of PSE-PSOE have put their trust in Idoia Mendia, an experienced politician whose aspiration will be to have sufficient parliamentary strength to be decisive in the election of the Lehendakari and in the forming the Basque Government. The Socialists now govern with PNV in the territorial provincial governments, capitals and many Basque cities and it seems logical to think that, despite the habitual differences that come up during the campaign, their desire is to repeat the same combination in the Basque Government.

On the other hand, the right-wing PP will try to increase its stronghold in the province of Araba and try to hold its ground in the other two provinces. It has called on Alfonso Alonso, former Mayor of Vitoria-Gasteiz who has resigned from his post as Minister of Health of the interim Spanish Government of Mariano Rajoy. Finally, Ciudadanos, the new Spanish Center-right party will attempt to gain foothold in the Basque Parliament for the first time, although it does not seem to be an easy mission for them. 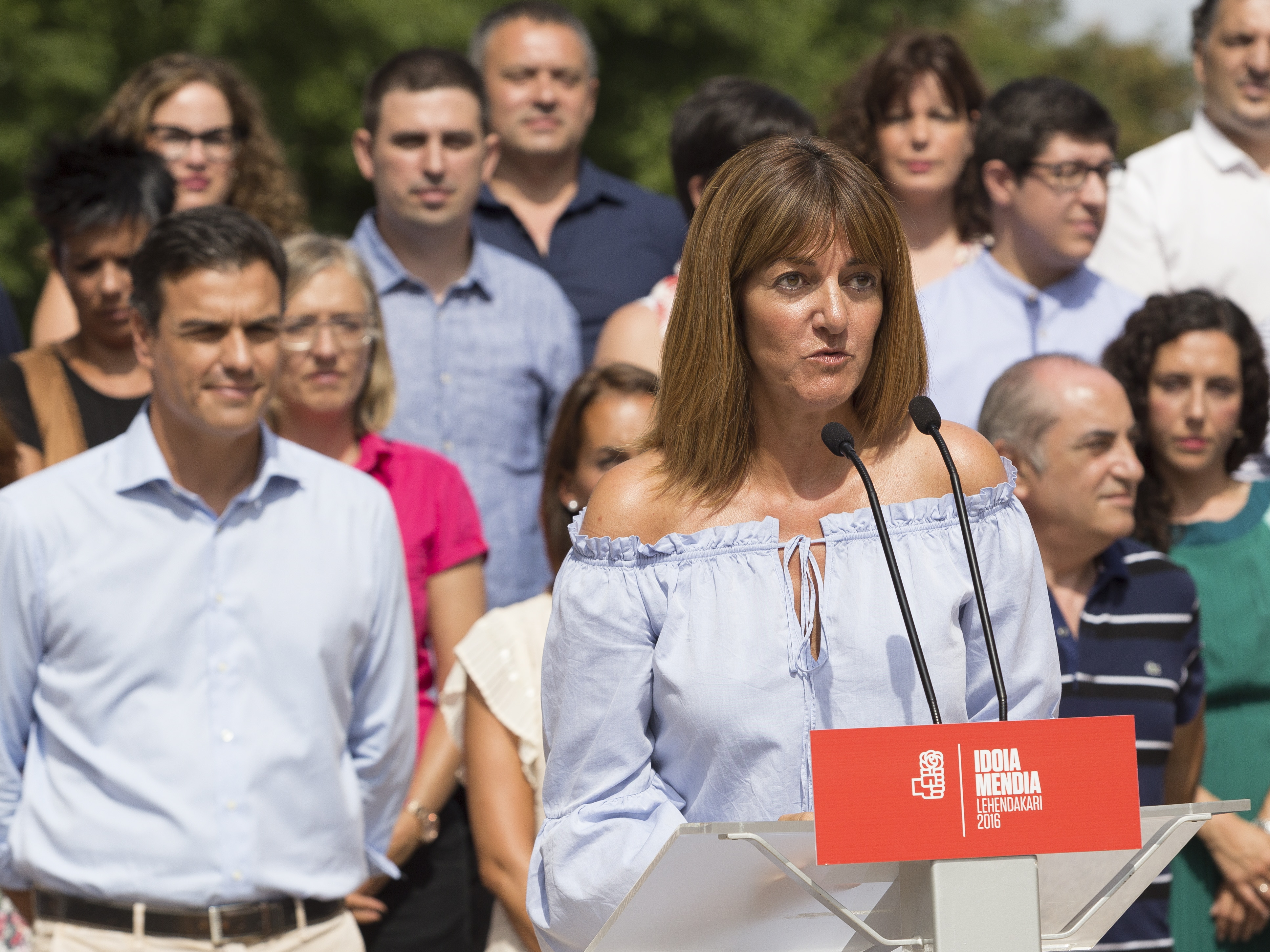 Basque Parliament comprises 75 members. One of the features of the electoral system is that each province chooses 25 parliamentarians, regardless of its population, this way to be chosen in Araba many fewer votes are needed to be elected than if you were to be chosen in Bizkaia. The Lehendakari is chosen by the Basque Parliament, which means that a victory in the elections does not necessarily guaranty access to the Presidency. This already happened in 2009 when although Lehendakari Ibarretxe (PNV) won at the polls, an alliance between PP and PSE-PSOE named the Socialist, Patxi López, Lehendakari.

Until now, after the 2012 elections, PNV has had 27 parliamentarians, EH Bildu 21, PSE-PSOE 16, PP 10 and UpyD, a party in its extinction phase, 1. The irruption of Podemos can bring with it a more fragmented Parliament and alliances with much more multifaceted dynamics. There is much speculation about the possibilities of post-election agreements, but the only certainty is that no party or coalition will have sufficient strength to legislate and govern without agreements with one (or more) parliamentary forces. 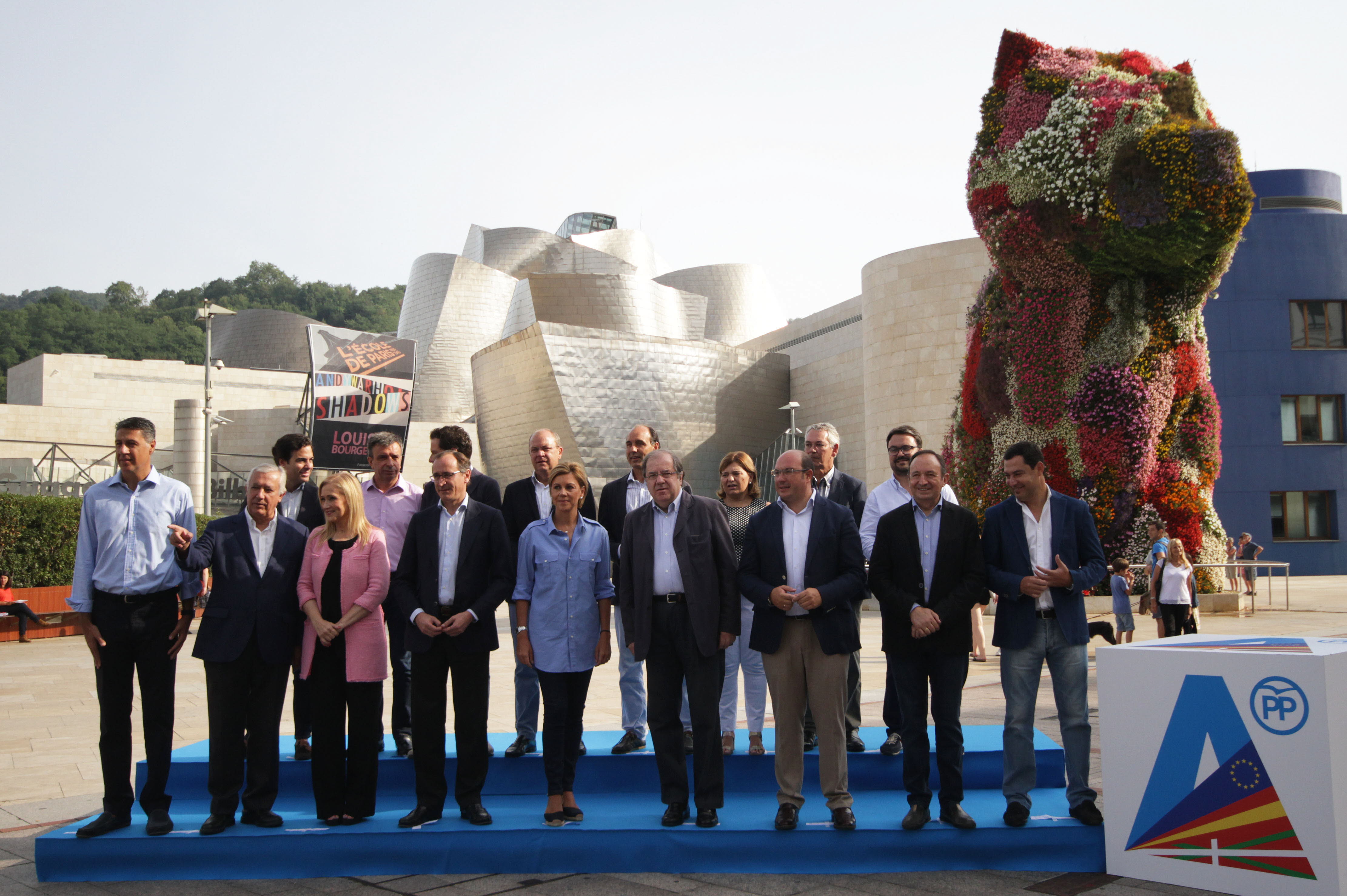 Meanwhile, in Madrid they will be following what happens in Basque elections very closely. Some think that the absolute paralysis of the Spanish political situation (many months with an interim Government, the inability to choose a President of the Government, repetition of elections…) could be unlocked depending on what happens in the Basque Country on September 25th. This may be an unlikely hypothesis, but in politics anything can happen.

After elections, Basque Tribune will offer a detailed analysis, both with the results and subsequent alliances for the election of President and the Basque Government.

Be the first to comment on "Basques Get Ready to Vote"