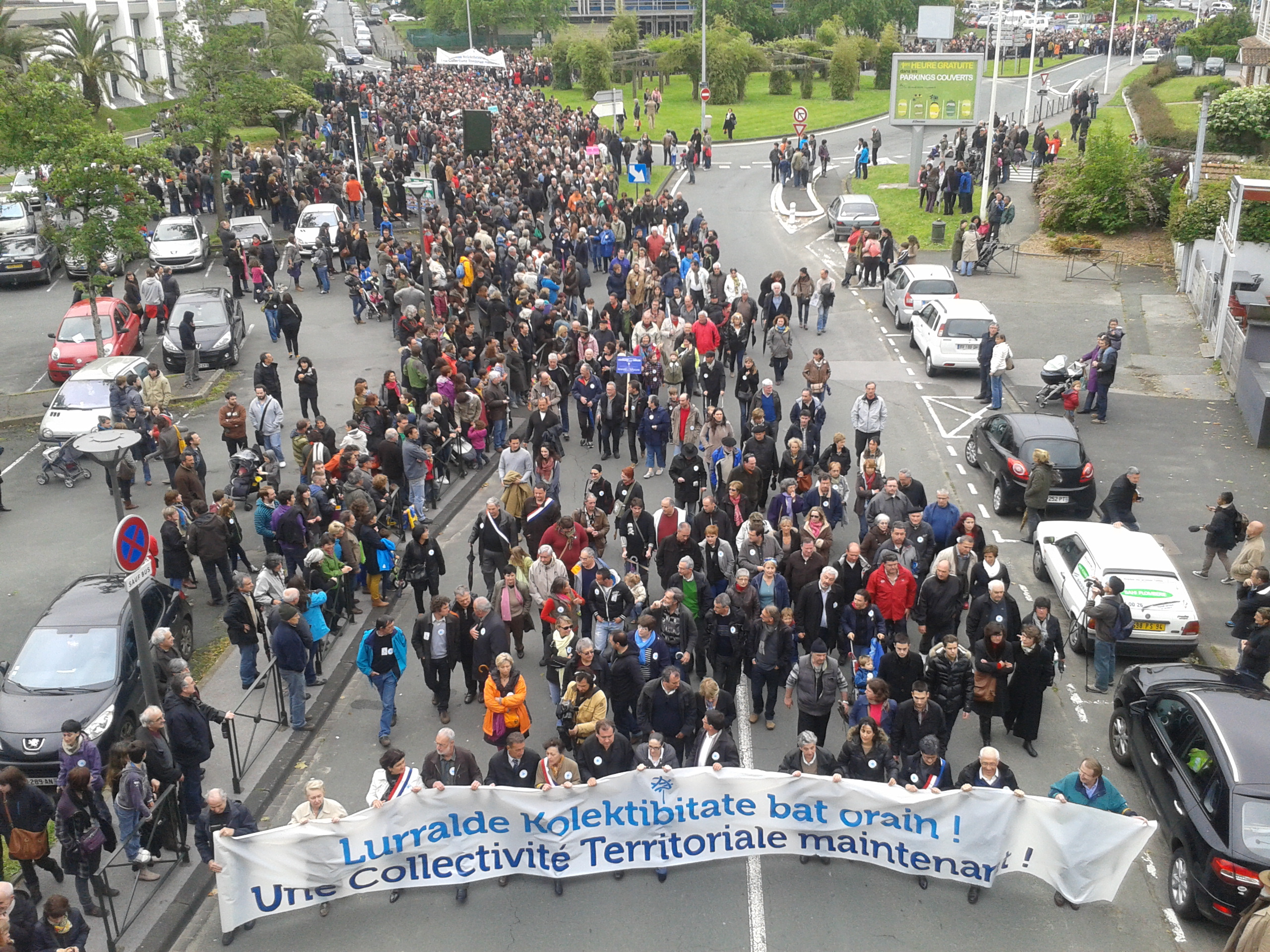 June 2013. Demonstration in Bayonne in favor of a governmental institution of Iparralde. Photo: @FranckDolosor

The institutionalization of the Northern Basque Country has entered into a decisive phase as a large majority of towns, representing more than half of the population of that territory has adopted the proposal submitted by the Delegate of the French Government with regard to the creation of a Basque Country community, which would include the 158 towns of Iparralde (name in Basque referring to the three Basque provinces in France).

This advisory vote, which took place in December 2015, will result in a final and binding vote the spring of 2016. Meanwhile, a deepening of the conditions of creation and functioning of this intercommunal institution will take place to help Council Members make their final decision. If the results of the first vote are confirmed, the Northern Basque Country will have its own governmental institution as of January 1, 2017.

This proposal falls within the context of the third phase of the French decentralization, after the adoption of the Notre Law of August 7, 2015. This law, which establishes new administrative divisions of France, means the strengthening of regions and clusters of communities. At the same time, it contemplates the reduction of the number of regions, going from 22 to 13, thanks to:  the fusion of some of them, one of them being the Aquitaine Region, where Iparralde is included; the expansion of regional powers, especially in terms of economic development, sustainable management of territory and transport; the abolition of the general clause of powers of the regions and departments to avoid duplication; and the expansion of clusters of communities that will need to have a minimum of 15,000 inhabitants. 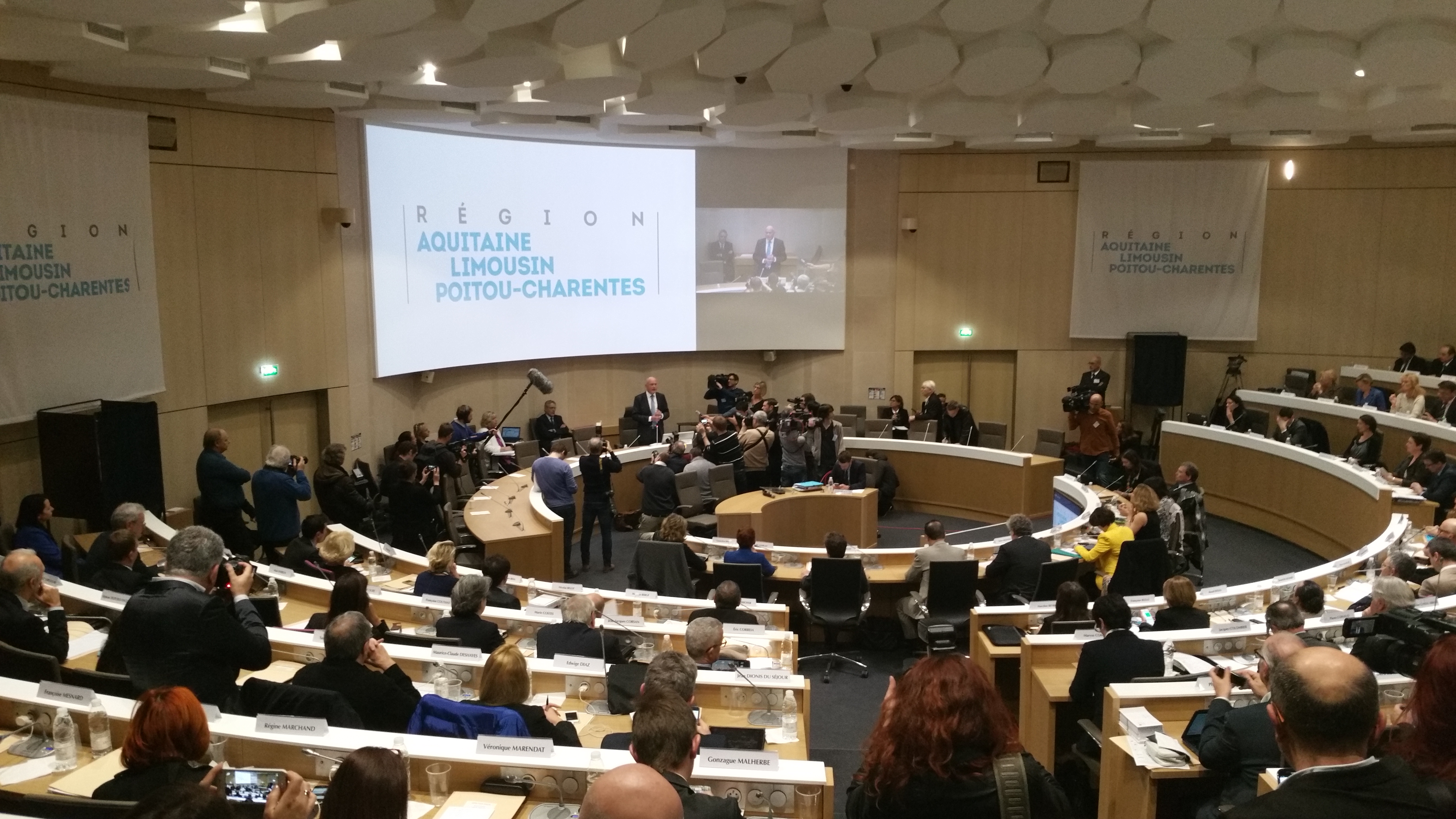 Parliament of the new Aquitaine, Limousin, Poiton-Charentes Region, of which the Northern Basque Country is a part. Photo: @FranckDolosor

Actually, the proposal of the Delegate of the French Government regarding Iparralde results from reactivation of the territorial claim from the nineties of the last century and the creation of the Batera platform in 2002. This platform, which brings together parties, unions, associations and independent people, has organized numerous activities in the form of demonstrations and collections of signatures to enable all the entities concerned. At the same time, starting from 2009, the Council of elected members of Iparralde, in close collaboration with the Development Council, began extensive work on governance and institutionalization of that territory. This work led, at the end of 2012, to a historic consensus among numerous political and social groups surrounding the creation of a Territorial Collectivity of unique status. 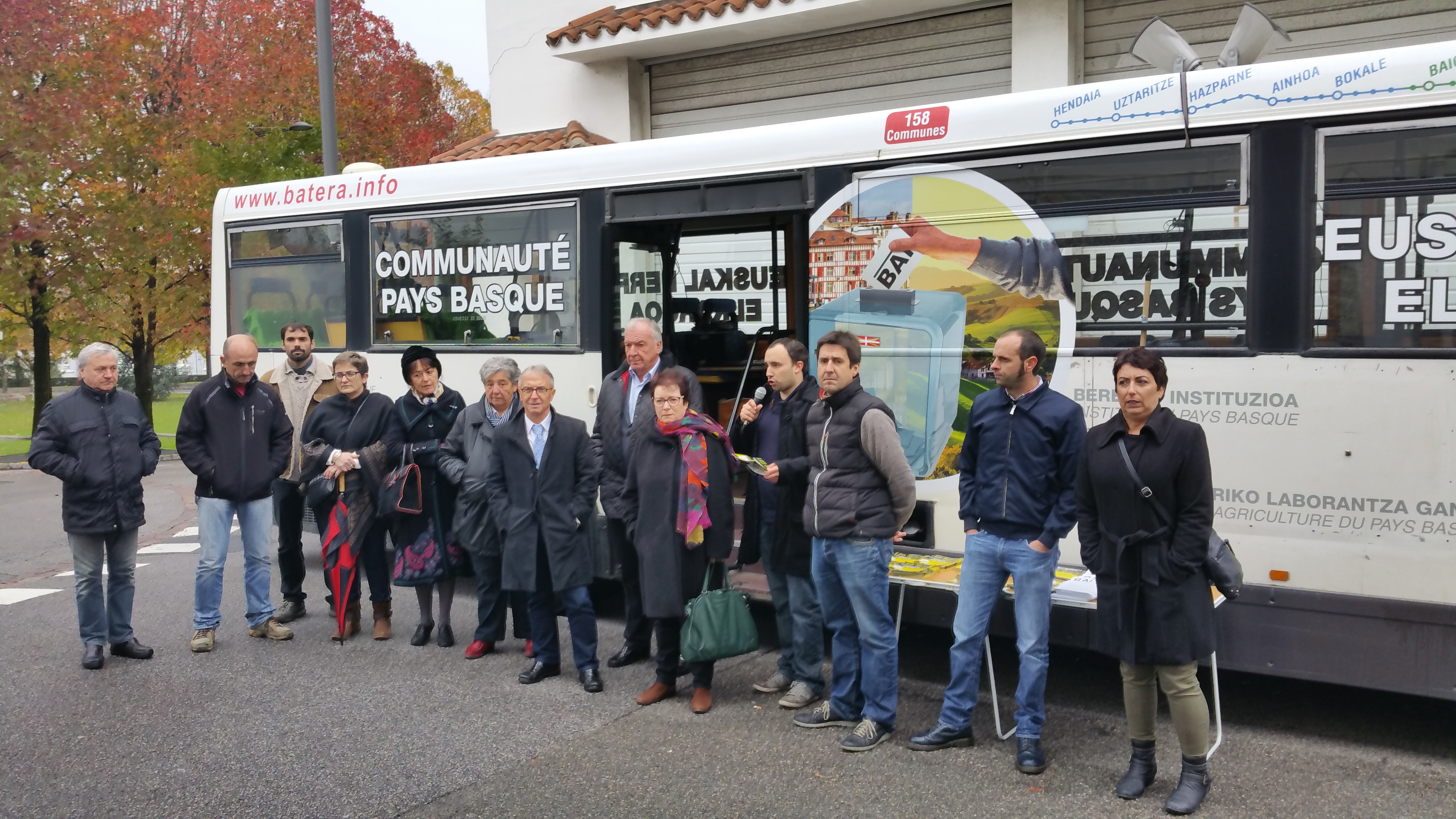 Bus of the Batera platform, on its loop through Basque towns in favor of a governmental institution in the Basque Country. Photo: @FranckDolosor

This territorial project was promoted during the year 2013 by a Committee comprised of members of Parliament, the Chamber of Commerce and industry of Bayonne, the Assembly of municipalities of the Basque Country and the Batera platform. This Committee held several meetings with the Minister of decentralization and summoned two demonstrations, bringing together 6,000 people in June 2013 in Bayonne, and 3,000 people in November of that same year in Maule. Excluded from the parliamentary debate, this project was officially rejected by the French Prime Minister on November 20, 2013, although he invited the territory to study other scenarios of evolution of its governance, in the context of the territorial reform undertaken by the Government. 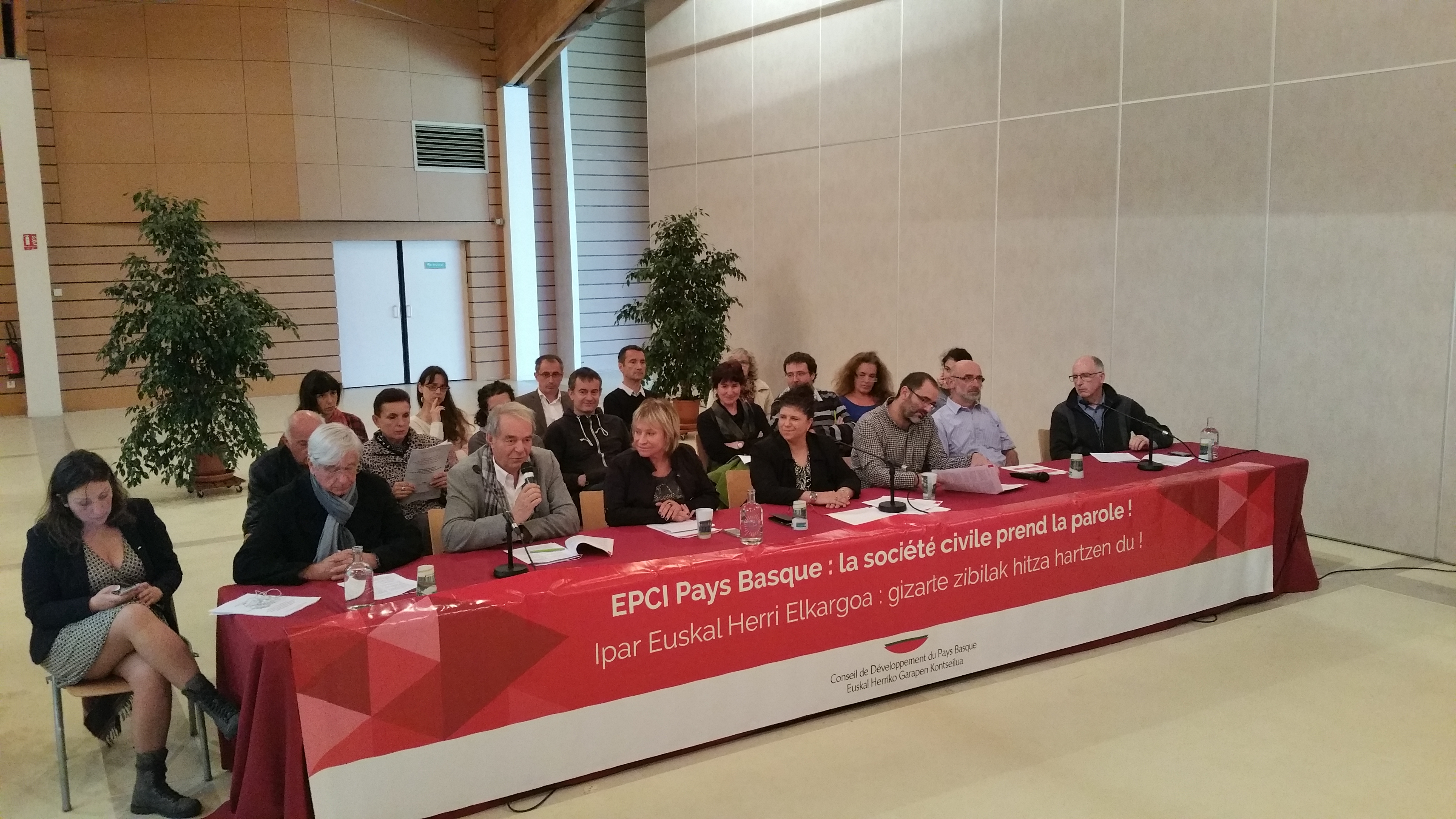 Press conference with members of civil society in favor of a YES vote. Photo: @FranckDolosor

In June 2014, the delegate of the Government of the Atlantic Pyrenees (the Department to which the Northern Basque Country belongs) formulated different proposals, inviting the Council of elected members to launch a new phase of reflection. Widespread expertise began thereafter, in close collaboration with the clusters of communities, with regard to the possible creation of one of its own for Iparralde. With the final approval of the Notre Law published in the Official Record on August 8, 2015, the reform of French inter-commune map was implemented, which will result in a final vote of all municipalities in the Northern Basque Country between March and April of this year, 2016.

If the vote passes, the territory would enjoy its own governmental institution for the first time since the French Revolution of 1789.

Cristóbal Balenciaga. The Basque Roots of a Fashion Master