In the article published in Basque Tribune in October of 2013, The Stifling of the Basque Language in Navarre, I wrote this final reflection: “the ‘sine qua non’ condition for the Basque language to survive in Navarre is a shift of the electoral map, removing UPN from governing power”. It is what I wrote, but certainly few thought that in the short term it would be possible to take the pro-Spanish, right wing out of power in Navarre. 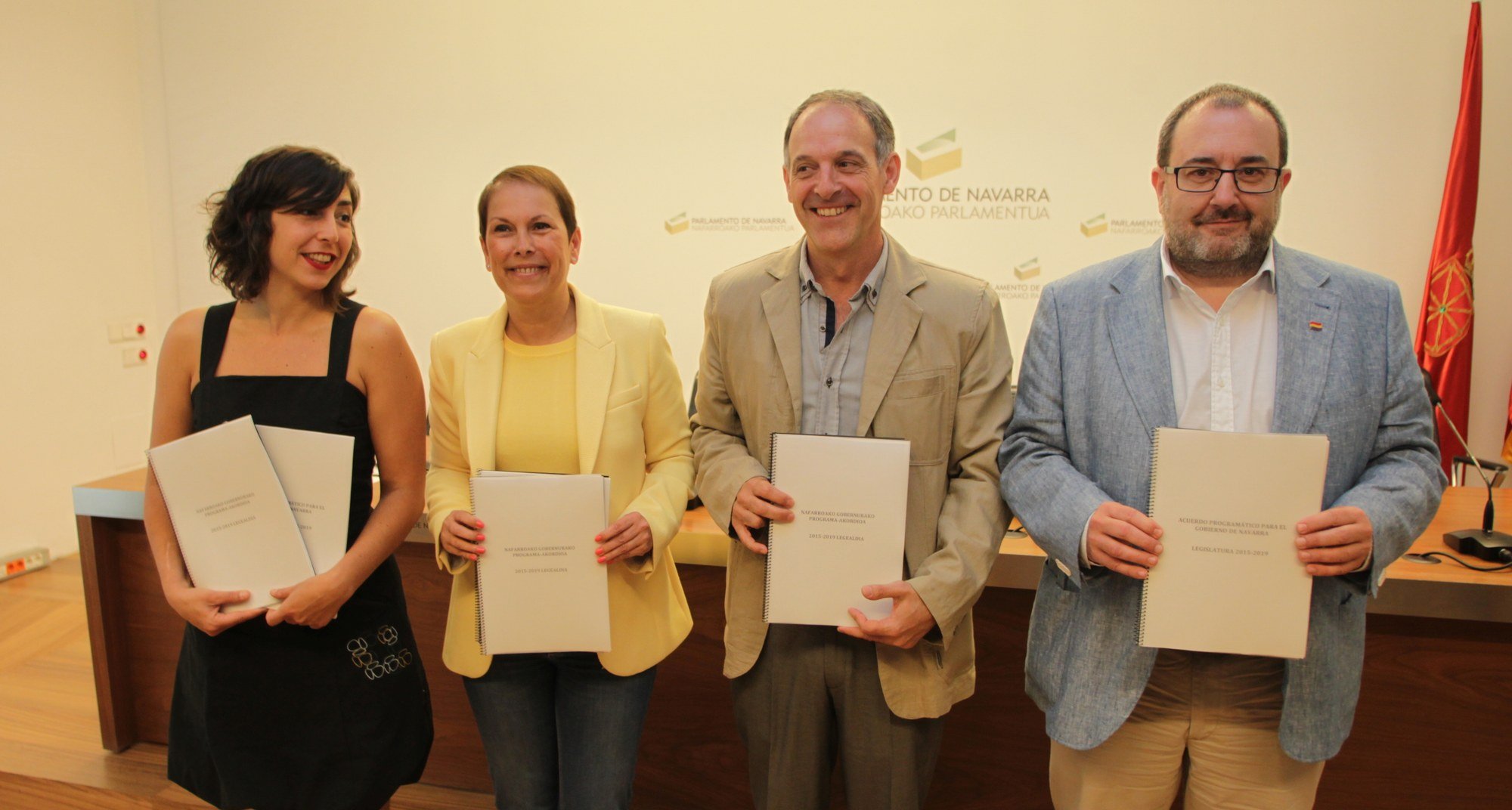 Representatives of the four electoral coalitions the day of the signing of the agreement for the Government of change. Photo: Javier Bergasa (Diario de Noticias)

But surprisingly, the results of the elections of May 24, 2015 brought with them a different Provincial Navarrese Parliament. UPN continued to be the largest force (15 parliamentarians), but lacked the strength needed to form a government, even with the support of their usual allies of recent times: the Socialists of PSN (7) and the Spanish right, PP (2). Between these three parties they totaled only 24 seats. However, there were 26 seats opposing them.

Still, what had been the opposition until then was divided. Four political forces with different origins, characteristics and objectives: Izquierda-Ezkerra, which brings together the classical Spanish left wing (2 parliamentarians); Podemos-Ahal Dugu, representative of the new Spanish left wing (7); EH Bildu, the new platform of the Abertzale left (Basque Nationalist) (8), and Geroa Bai, the coalition bringing together pro-Basque social democrats and Christian Democrats (9).

First, new City Councils were appointed (on the same day when the local elections had been held). In most of them, the new correlation of forces showed UPN losses at the most important municipalities, with the forces of change winning. In these circumstances, EH Bildu benefited the most. For example, since then, belonging to this coalition is the Mayor of Pamplona, Joseba Asiron. In the Provincial Parliament, with Geroa Bai being the most voted on among the four forces of change, this coalition led negotiations. As a result, the journalist from Pamplona Uxue Barkos, leader of Geroa Bai, became the first Basque-speaking, nationalist Lehendakari (President) of Navarre on July 20, 2015. 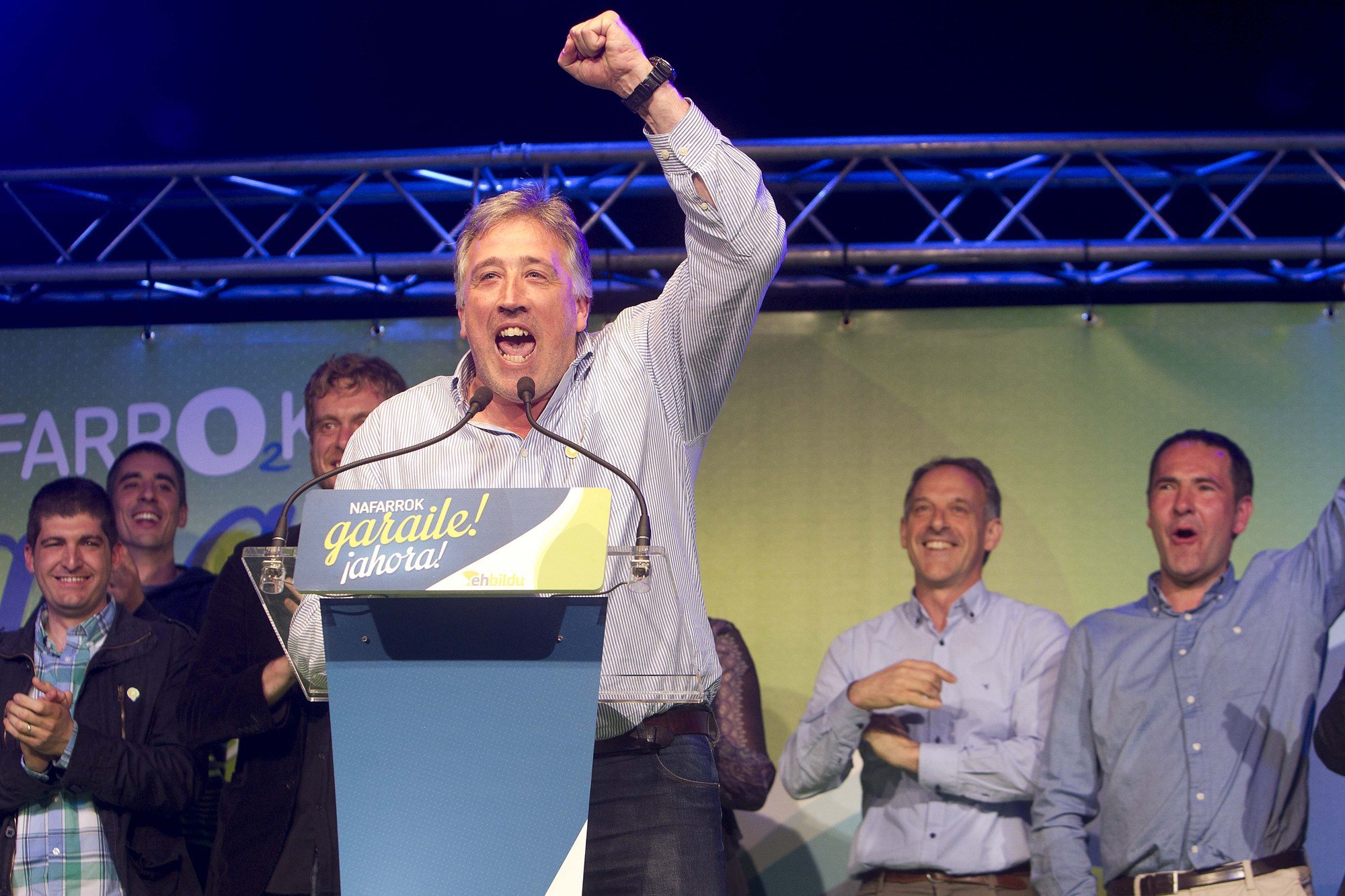 The Legacy of UPN

The inheritance passed on to Barkos is not easy to manage, since UPN left Navarre in extreme debt. Not even a month had passed since the establishment of the new Government, yet a new unexpected economic hole in the accounts has already appeared. Sanz and Barcina, former Presidents, had acquired enormous commitments of expenditure whose sole purpose was often none other than benefiting large economic interests, friends or colleagues of the party, with large proportions of dubious or completely useless projects. Along with that, the deterioration in health care and public education and the decline of social services have been other stigmas of the UPN term in power.

The revitalization of these weak sectors has been precisely the priority of the Barkos Government and the main axis of the program agreed upon by the four forces of change. However, without economic resources, it is difficult to undertake such a task effectively. So the new Government has stalled and cancelled some projects implemented by UPN. But since these measures have been insufficient, a fiscal reform has been approved allowing a budget increase.

This measure has raised harsh criticism from all three parties of the opposition, as well as the condemnation of business owners. They have argued that it will hurt the economy and will bring an exodus of companies out of Navarre. As of yet there is no data to confirm this hypothesis. 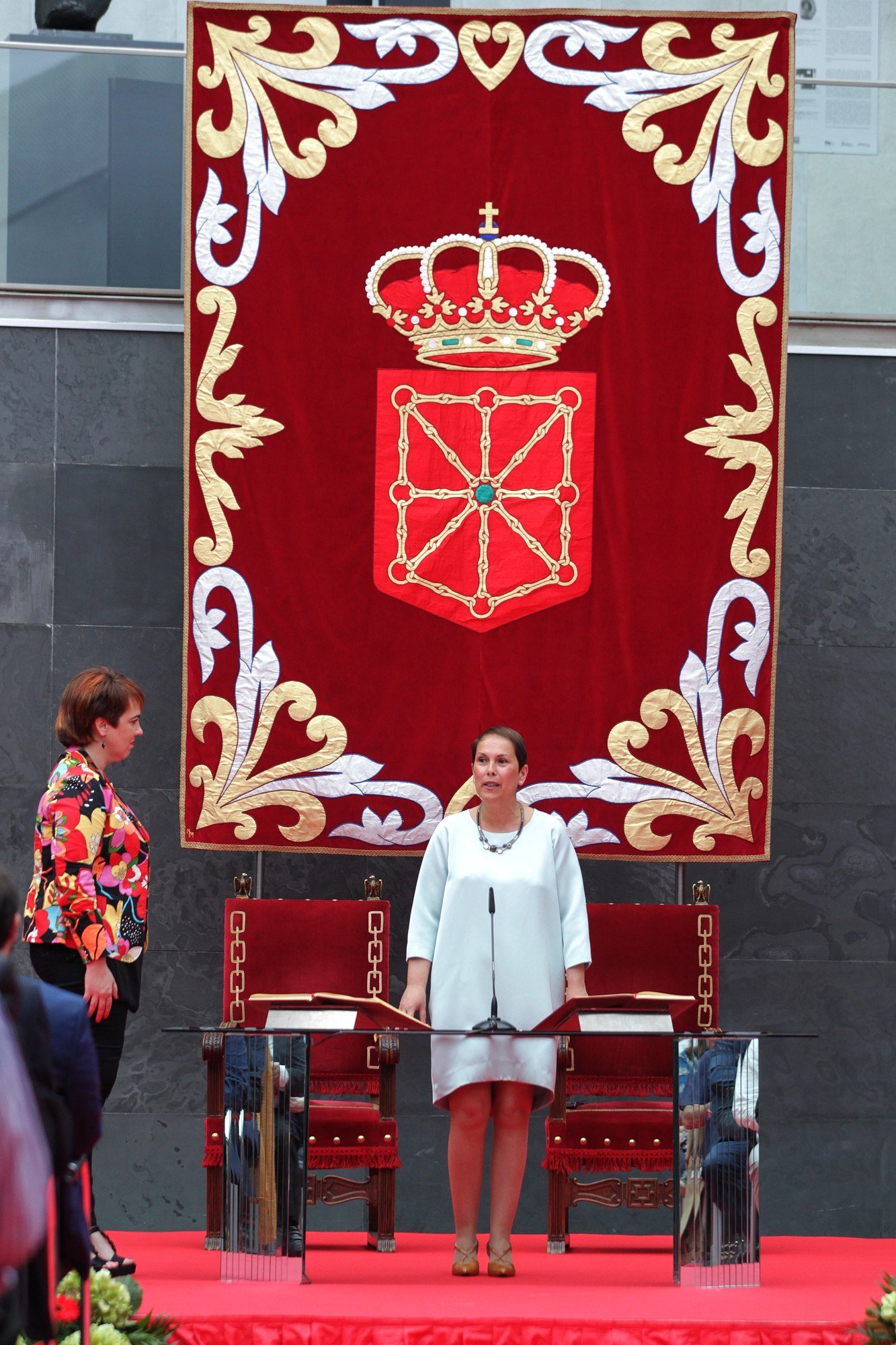 Since Barkos assumed the Presidency, relations have been reactivated with the Basque Autonomous Community and also with the Department of the Atlantic Pyrenees and Aquitaine region (where the Basques on the French side are located). There has also been recognition of victims caused by the police during times of violence. And a new law regarding symbols is underway, which aims to put an end to the ban of the Ikurriña (Basque flag) in Navarre institutions.

In addition, the arrival of Barkos has broken the sectarian politics of UPN with the Basque language. The will to give the language visibility and presence in the Navarre Government has been noticeable since July 2015. Euskalerria Irratia (Basque radio) has already been legalized. The four channels of ETB (Basque television) can already be seen in Pamplona and its surrounding areas. Two more Basque language nursery schools have been opened in the capital. There have been job offerings for Basque-speaking teachers. Subsidies are already lending support to Basque literacy and adult literacy, culture and the media in Basque and there are already Basque language programs in the public network in the non-Basque speaking areas of Navarre.

It is obvious that the increased weight of the Basque language in the budgets of the community is a trifle compared to health, education and social services. However, each of the decisions made in this area by the new Government and the new municipalities have caused a stir. The opposition has substantially raised the tone of political discussion regarding the Basque language, without fear of exaggeration, and in many cases involving lying. In this whirlwind, if we believe what UPN, PP and, sometimes PSN say, then the non-Basque speaking Navarrese are on their way to becoming second-class citizens. It matters little that this is a huge misconception if it serves to undermine the new Government. The issue has also created rifts between the forces of change. Podemos-Ahal Dugu and mostly Izquierda-Ezkerra have aligned themselves on occasion with the opposition, leaving Geroa Bai and EH Bildu alone. 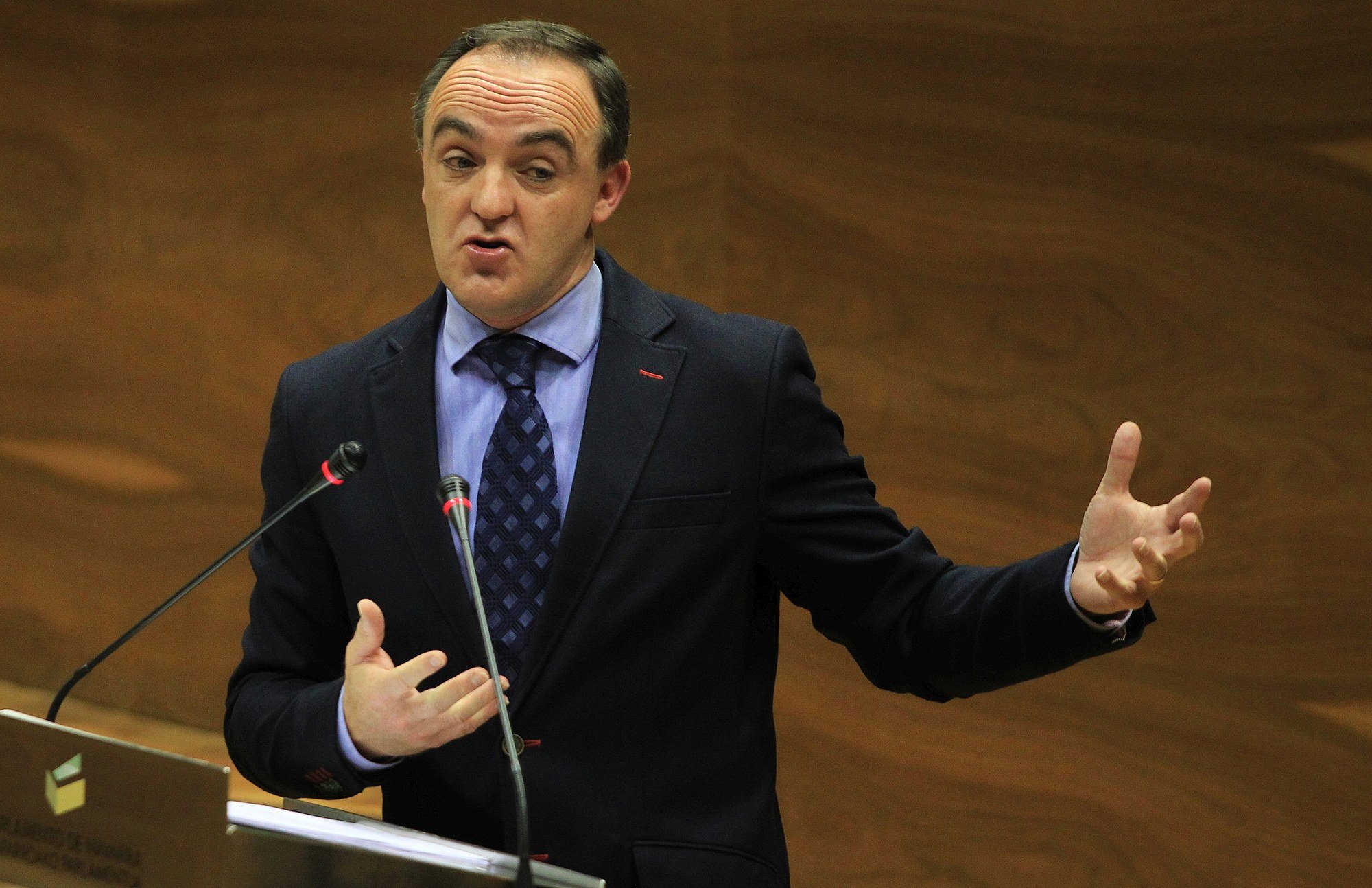 Despite leading his party´s ballot with the most votes, Javier Esparza (UPN) is now with the opposition. Photo: Javier Bergasa (Diario de Noticias)

The Uxue Barkos Government has already been aware of the importance of acting with prudence and pedagogy in this field. Warned of the difficulty of governing, the new leaders are gaining experience at defending the way they are doing their jobs. The ship of change in Navarre is learning that in an unsettled sea, the straight route is not always the most appropriate. It certainly is challenging but nobody ever said it would be easy.