The artist Judas Arrieta was born in 1971 in Hondarribia, a small village located in the Basque province of Gipuzkoa. His interest in Asian culture began early on through series and cartoons broadcast by television channels of his childhood. He gradually developed his interest in the Asian world and when he decided to become an artist, all his Eastern influences came to light.

Today his work is to be considered a bridge between two primarily very different cultures (Basque and Chinese). His works are attractive, fun and unique, that is why I couldn´t wait to post this interview. I hope it helps you understand this artist and his work more in depth. 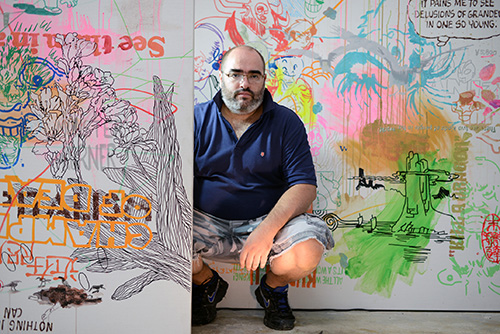 Since when did you have the perception of yourself as an artist?

I remember that when I was very little I would draw, a lot, I also remember that I liked people to see me drawing. I would draw upside down so that people who were in front of me would see my drawings correctly… My family realized very soon and sent me to many academies, but I never found my place in any of them. No one gave me what I wanted.  My grandfather worked in a movie theater, so I was able to enjoy, free of charge, interminable film sessions in the great Astoria cinema in San Sebastian. I loved the stairway leading to the amphitheater, filled with photos of famous actors of the golden age of the International Film Festival of San Sebastian. So with this background I headed to the University of Fine Arts of Bilbao with the idea of studying filmmaking. Soon I realized that I was not meant to work in a team setting and decided to create my own films in two dimensions, and thus the painter Judas Arrieta was born. 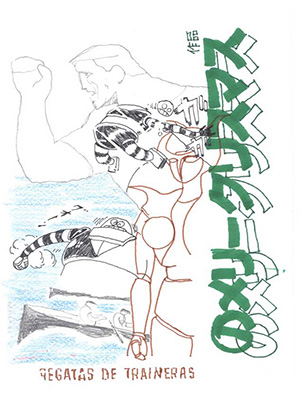 How did your love relationship with the Asian world come about?

Two more hobbies that we must link to cinema are comics and television. In the end, they are things I grew up with. A person is formed, a person forms himself and one is also shaped by his surroundings. In my case, comics, first American and European and then Japanese, were an unlimited source of great moments in my childhood and youth. Television and cartoons became an escape route to everyday life, my first journeys through the stars, in which I mixed fiction, dreams and reality.

Until beginning at the University I had not begun to reflect on my relationship with these interests. I then begin to paint like crazy, in a visceral way, and all the elements I grew up with appeared, mixed with a way of doing (painting) learned by nearby artists or studied during that period. It is at the University where you realize that to excel in the world of art you must be original and what I was doing worked and above all I enjoyed myself doing it.

In the history of art there have been countless artists and trends that have been inspired by Asia. In my case, I remember as a small boy, seeing Saturday films of Kung Fu, robots or rough mechanics, then I grew up, and I realized that they came from Asia. So, I was interested in all that and studied it and applied it in my work as the main identifier for a generation of young people like me who had grown up with it.

You´ve lived several years in Asia, in China mainly.  So how do you see the world of art there?

I always say that one cannot choose where he is born but he can choose where to grow up and I’ve always wanted to know why I was so drawn to Asia. So in 2002, I travelled for the first time to Japan, and since 2005, I went to live in China. Many things happened in Beijing at all levels in very few years. If we talk about art, artists went from having their expositions at their homes or studios to having them at galleries. There are very few galleries doing serious work, many spaces belong to groups of artists, publishers, curators and investors so they do it all themselves almost all the time. Still, it is a very dynamic scene and much more authentic than that in other countries.  Here, there are no second chances and every occasion must be seized, there are no institutional scholarships or contests… so either you sell or you have to go home. There is still a lot be done in China if we are talking about contemporary art.  There is also much more competition than in other countries because in China there are other luxury markets such as antiques, jewelry, traditional Chinese painting… For foreign artists who are in China and want to succeed, you must first learn the language and learn to communicate and then you can begin to see opportunities. 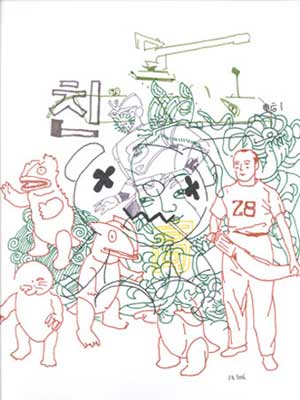 Your Asian influences are clear, but what about your Basque roots in your work?

Does anyone know where Basque roots come from? And the Basque language? Of course I have thought about these things through my work, especially regarding issues of popular culture and folklore. My paintings and drawings are filled with characters and super heroes from comics and magazines.  Our popular culture also has them.  In my case I think that they are the handball players, stone weightlifters and why not jai-alai players or sheep herders who left the Basque Country in search of a better luck. They appear in some of my drawings or series. But still I think that my roots are found more in the attitude of how I deal with my work. I want to enjoy and have others enjoy. I want to break the mold.  For me, my work is a constant and daily adventure doomed to fail, something very Basque. I am hard-headed.  I was born an artist and I want to be an artist until I die although I know that in the Basque Country it is not the best place for it.

Explain to us a bit about what your art is based on.

After visiting different countries, I believe that although we are culturally different (by language and customs), actually looking at everyday life we’re not so different. Normal people in this world despite their condition, color or religion want the same thing: to dream and to pass on a decent life to their own… I think that people in power confuse us. Being different is not a reason for hate; being different is a reason for joy, it is richness and diversity. The elements or sources of my work are many, from different cultures. Mixing them together, I try to make beautiful things so that people enjoy them. I want people to fall in love with my work. For me art is giving back what you have been given. If I had not lived, known or had not fallen in love with thousands of things, I could not do the work that I do. On the other hand, and as an artist, I have before me the entire history of art. I would like to have place in that history, not for my own pride, but I think that as an artist, I have to question everything that is done and has been done so far, so that with my work I can try to contribute or leave my mark. 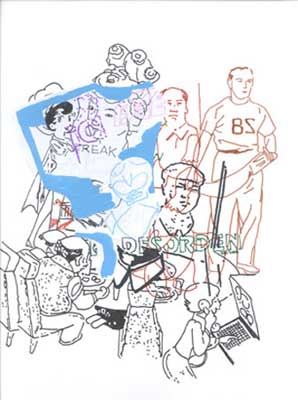 Right now, with such a heterogeneous art scene, so varied and in constant change, where would you place your work?

Some time ago, in an interview I defined myself as a “r?nin”, a wave man, a samurai without a master. This is my best definition and description of my place in the world of art. I do not side with anyone anymore. I only work and display my work in places or with people who are enthusiastic about my work. My work is sold more online than in galleries.

‘Made in Basque’ Fashion

CIC nanoGUNE: the Big Challenge of the Small

2 Comments on "The Far East of Judas Arrieta"