When looking closely at the political map of the Basque Country one cannot avoid noticing the huge central “hole” that appears in the middle of the province of Alava. This space is known as the Enclave of Treviño, which politically belongs to the province of Burgos (one of the provinces of the Castile and León autonomous region) and currently consists of two municipalities: La Puebla de Arganzón and the Condado de Treviño.

The situation of this enclave is not entirely unique in Spain. Neither is it in the Basque Country, where we can add to the case of the Enclave of Treviño that of the Valle de Villaverde, belonging to Cantabria, although geographically located in the province of Vizcaya. Or, to mention a reverse case, we also have the Petilla de Aragón enclave of Navarra, geographically located in the province of Zaragoza. 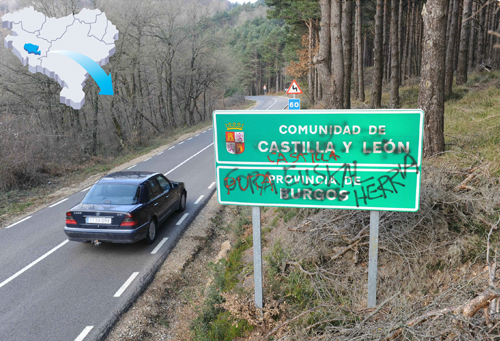 The town of Treviño was founded in 1161 and La Puebla de Arganzón in 1191, both by the King of Navarre, Sancho VI. Like the rest of the territory surrounding them, they became property of the Crown of Castile in 1200, after the conquest of King Alfonso VIII. In 1312 and 1366 respectively, the Kings of Castile granted ownership of these villas to two different vassals in payment for their services. This way, they no longer belonged directly to the King and became manors, managed in a proprietary form.

In 1463, the Fraternity of Alava was formed (the seed of the future province). These alliances between different towns were created to deal with public disorder, banditry and abuse of many feudal lords. With time and the support of the Castilian monarchs, who wanted to limit the power of the feudal lords who did not support them, they ended up compiling many more administrative, legislative, judicial, military and fiscal powers. But joining the Fraternity involved an overlay of jurisdictions that limited the exclusive administration of those lords. This led to rejection of the incorporation of their territories to the Lords of La Puebla and Treviño. And this final non-integration of the territory of the future Enclave of Treviño to the Fraternity of Alava established its final differentiated political and administrative future.

Various attempts to integrate Treviño into Alava began very early. In 1646, King Felipe IV rejected a request for this by the inhabitants of the enclave. The process of division of the Spanish territory in provinces which occurred in 1833 was not fruitful in this effort either; nor was the proposal of integration from the provincial Council of Alava (the provincial government) after the loss of the foral privileges in 1876, with the Carlist defeat by the Liberals in the war. Subsequent attempts in the early 20th century also failed.

The new development that took place thereafter was that the initiatives were led by the inhabitants of the Enclave. Thus it happened in 1940, just after the end of the Spanish Civil War, when a petition signed by 95% of the inhabitants of the Treviño territory was rejected by the new Franco Government. The refusal of the province of Burgos was supported by the report of the Royal Academy of History, which certified the historical belonging of the enclave to Burgos.

Interestingly, it was the Franco Government which, in 1958, provoked the following demand of incorporation to Alava, trying to comply with what was agreed in the Concordat signed between the Government of Spain and the Vatican, which stipulated the coincidence between the ecclesiastical and the civil administration. The membership of the parishes of Treviño to the bishopric of Vitoria showed an anomalous situation which, on the other hand, pointed out the close relationship with Alava outside of strictly political and administrative terms. Finally, the Government decided to leave the situation unchanged to avoid elevating friction.

The great hope for the solution of the contentious situation came after the death of Franco and the beginning of the establishment of the democratic system in Spain. In particular, the creation of the autonomous communities and their respective Statutes of Autonomy offered the timing of a possible variation of political borders. The Statute of Autonomy of the Basque Country (Statute of Gernika), approved in December 1979, provided the legal mechanism to make the integration possible. To accomplish this, the following was necessary: the request of the concerned municipalities, the audience of the province of origin of the enclave (with a non-binding opinion), the ratification in a referendum by the inhabitants of the enclave and the approval of the Basque Parliament. 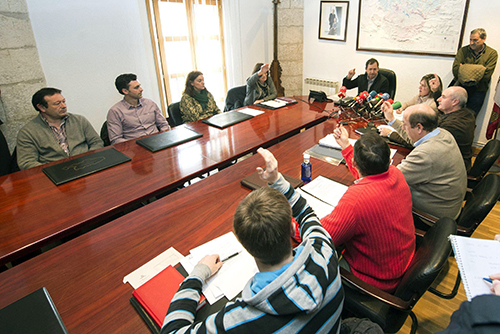 This is how a new initiative began in 1980, which also failed, due to the administrative silence of the Madrid government and the decision of waiting for approval of the Statute of Autonomy of Castile and León in 1983. In this particular Statute, the mechanism of the Basque Statute for the integration of Treviño was neutralized, giving prominence to the decision of the Castilian provincial and regional institutions on the issue. The Basque Government´s appeal against the Castile-León Statute, understanding that it contravened a previous legal regulation of equal rank (the Basque Statute) also failed.

Since 1995 attention has been focused, largely, on the results of the various municipal elections that have been held so far and the initiatives that the mayors and council members elected in both municipalities of the Enclave have been taking. And, in summary, we can say that in La Puebla de Arganzón supporters of incorporation to Alava, have been the clear majority while, in the County of Treviño, there has been a more equal division. However, a referendum held in this second village in 1998 made the majority will clear of its inhabitants for the incorporation to Alava and for the unity of action with La Puebla de Arganzón. A referendum that the Government of Castile and León tried to stop and that was unauthorized, though not prevented by force, by the Spanish Government headed by José María Aznar.

During the last 15 years, the fight for incorporation has been on-going, more constant and also largely favored in La Puebla de Arganzón, and more intermittent (depending on the political composition of the Council) in the County of Treviño. It has sought to deepen relations with the Basque Country, reinforcing the presence of the Basque language and other cultural elements. Currently, with a majority in the municipalities of both towns, the movement for the integration to the Basque Country has acquired new strength.

The will of the majority expressed by the inhabitants of the Enclave of Treviño of incorporating its territory in Alava has been ignored repeatedly by the institutions in Castile and León and Spain. The subjugation of the democratic will to the rule of the law (the Statute of Autonomy of Castile and León and the Spanish Constitution of 1978 that protects it) bring debate on this issue over whether laws are to serve the citizens, or whether the citizens should comply with them without discussion.

Finally, it should be noted that the decision on the calling of a referendum in the Enclave of Treviño is completely mediatized and conditioned by another factor: the existence of notable support for the calling of referenda on self-determination in Catalonia and the Basque Country. This circumstance makes Spanish institutions very reluctant to adopt a permissive posture towards any kind of initiative in that regard. But it seems clear that issues like this are, unfortunately, above the will of the majority of the people primarily affected: the residents of the Enclave of Treviño.

Peace: Mission Not Yet Accomplished

Basques from the Southern Basque Region and the First World War: an Opportunity for Growth

Be the first to comment on "The Enclave of Treviño: a Secular Territorial Dispute"