It has been more than 22 months since three masked persons, speaking for the organization ETA, announced in a videotaped declaration that their armed activity was over ­— for good. After more than four decades of violence (in which about 1,200 people have died, more than 800 of them killed by ETA and hundreds of them as a consequence of state-related violence) the Basque Country is experiencing a new era since October 20th, 2011. Mission accomplished?

Not really. Three days before ETA’s announcement, on October 17, international leaders met at the Basque town of San Sebastian. Among them were Kofi Annan, former UN Secretary-General; Bertie Ahern, former Prime Minister of Ireland; Gro Harlem Brundtland, former Prime Minister of Norway; and Gerry Adams, President of Sinn Fein. In the first line of a joint declaration, they demanded ETA to declare “a definitive cessation of all armed action.” Yet, ETA was not the only recipient of their message: if the armed organization announced the cessation of violence, the governments of Spain and France were urged to agree to talks “exclusively to deal with the consequences of the conflict.” In other words: they should not negotiate about political concessions, but about the unresolved issues related to the past violence. Two days later, former US President Jimmy Carter, US Senator George Mitchell and former British Prime Minister Tony Blair publicly supported the Aiete Declaration, named after the palace where the document was signed. Blair explained in an article (“A Basque Peace”, The New York Times, 21-10-2011), what kind of talks were proposed: “Just as we did in our talks in Northern Ireland, these talks will deal with the decommissioning of weapons, explosives and military infrastructure, with the issue of prisoners and exiles, with the rehabilitation of those caught up in the violence, with security normalization and with recompense for victims.” In short, the talks laid the necessary groundwork to assure ETA’s dissolution as a military force. 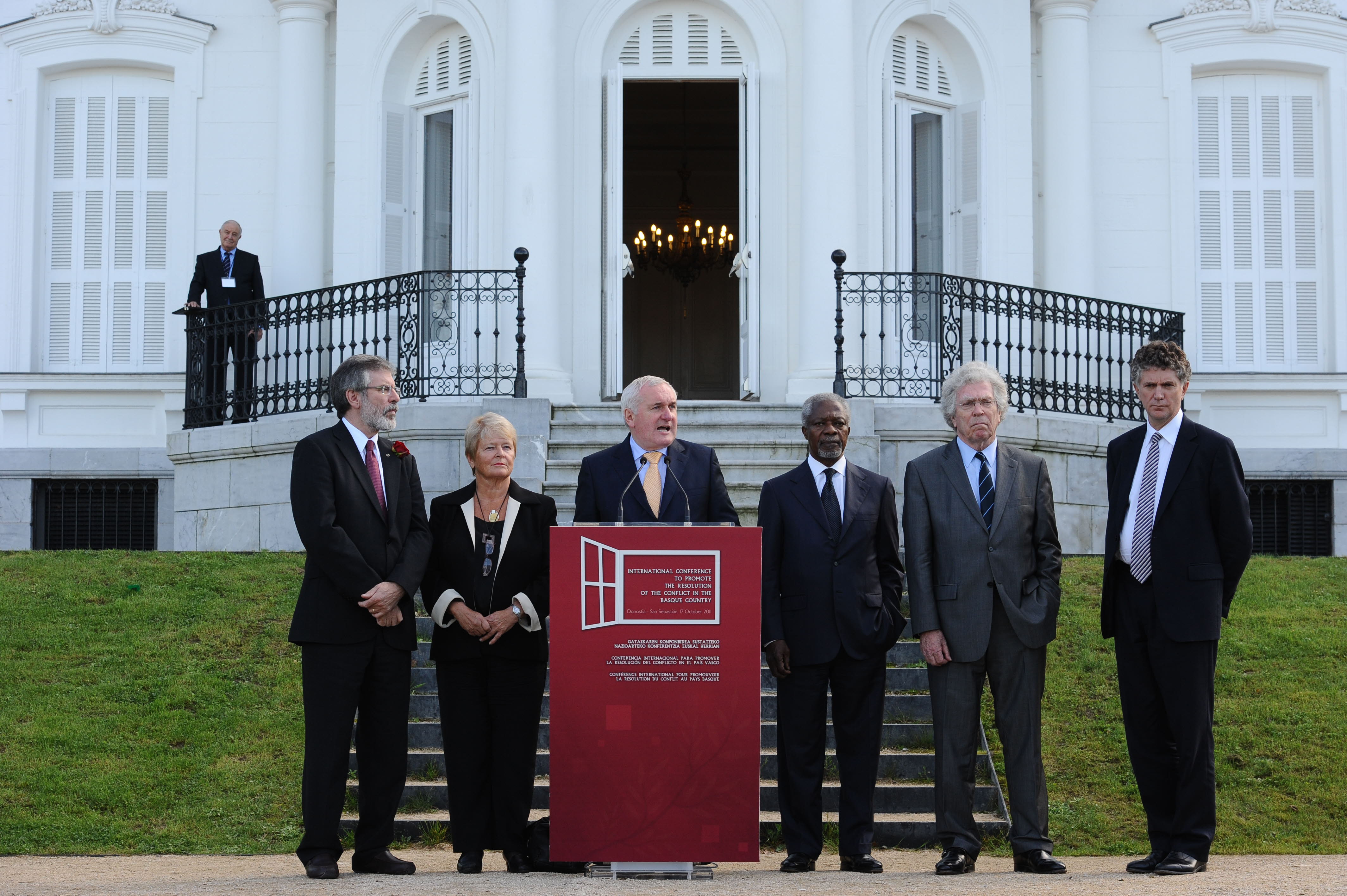 However, the Spanish Government, currently trapped in the Eurozone crisis, trying to handle a big corruption scandal involving the ruling party and menacing the Prime Minister Mariano Rajoy’s leadership and facing a sudden outbreak of secessionist fever in Catalonia, seems to look away. Mr Rajoy has rejected talks with ETA and has not taken any significant steps to solve the issues mentioned by Blair. The French government seems to support Spanish policy. Meanwhile, more than 600 Basque prisoners remain in prison and an unknown number of ETA activists are still in hiding, waiting for the chance to negotiate the terms of their organization’s dismantlement. The political leader of the pro-independence movement Arnaldo Otegi is serving a 6-year sentence, not accused for any violent activity, but for political activities allegedly under ETA’s direction. Yet, it is widely known that Otegi is the leading figure of the movement that confronted ETA when the armed organization was unwilling to abandon their armed activities. He is not the only prisoner accused of being a member or collaborator of ETA for pure political activities, and many more are threatened of entering Spanish prisons, as more than 80 political activists are going to be judged in two different trials beginning next October.

The challenge is not only to address the prisoners issue and other consequences of the violent confrontation but to address the root of this political conflict, the controversy about the Basque Country’s constitutional status. Again, the signatories of the Aiete Declaration gave the Spanish Government, and all involved political actors, reasonable advice for the attainment of lasting peace: “We suggest that non-violent actors and political representatives meet and discuss political and other related issues.” Again, the Spanish Government prefers to turn their back on any constructive solution. Nevertheless, change is coming slowly. ETA’s cessation has enabled, firstly, the legalization of the leftist pro-independence movement through the new political party Sortu, and, secondly, its alliance with other pro-independence parties within the coalition Bildu, which is currently running the provincial government of Gipuzkoa and the City Council of San Sebastian, among other institutions. After ETA’s cessation, Basque nationalists have the strongest majority ever in the Parliament of the Basque Autonomous Community: 48 seats out of 75 (27 seats for the moderate Basque Nationalist Party, and 21 for the leftist Bildu). The PNV, the ruling party in the regional government, recently called for talks with the objective of agreeing on a new political status, while the coalition Bildu is willing to activate a self-determination process. The Catalonian secessionist movement is now well ahead of the Basque Country´s, with a plan to carry out a referendum in 2014, an event that could potentially ignite a serious crisis regarding the Spanish territorial model.

Meanwhile, Basques are enjoying the new era without ETA’s violence with a mixture of hope and despair. Despite the blockade, Basque and international actors are working to advance toward a consolidation of a lasting peace. The participants of the Social Forum to Promote the Peace Process have recently recommended, in a joining declaration, “designing a controlled, ordered and agreed process that will conclude with the disarmament of ETA and the dismantling of its military structures” and reaching a consensus “on a comprehensive solution to the issue of prisoners and people ‘on the run’”. The armed organization has stated that they will take into account the Forum’s suggestions and will respond in detail to their requests. Some sort of gesture by ETA is expected soon.

It is an uncertain and unconsolidated peace. However, October 20th 2011 will always be a date to celebrate. The feeling of relief doesn’t go away despite the lingering sense that almost two years have passed without the progress needed to consolidate a lasting peace because of the Spanish and French government short-term political needs.

Be the first to comment on "Peace: Mission Not Yet Accomplished"