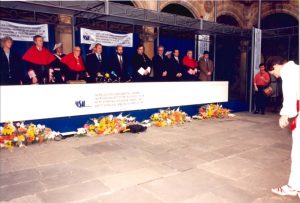 Inauguration of IISL in 1989

Since I could not attend as I would have liked the activities organized by the International Institute for the Sociology of Law (IISL) in Oñati in May of 2014 on the occasion of its 25th anniversary, I will take advantage of this opportunity given to me by Basque Tribune to, first of all, express my most sincere congratulations to both, the people comprising the group which surround and support the institution (teachers, researchers and students), and the founding institutions (the Basque Government and the Research Committee on the Sociology of Law of the International Sociological Association) and collaborators (the Foral Government of Gipuzkoa and the Oñati City Council), and also, and especially, to the staff led since 2013 by the scientific director of the Institute, Professor Adam Czarnota. 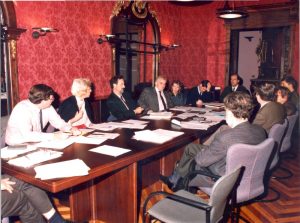 Beginning of the IISL: meeting of the Governing Council

Thanks to the work of all the people and institutions I have mentioned, since the IISL has managed to become a major reference of the global network of scholars working in the field of Sociology of Law studies, it can be said that the Guipuzcoan town of Oñati has acquired the ranking of “World Capital of Sociology of Law”. The choice of Oñati, in addition, was no accident: Oñati is a village of medieval origin situated in the province of Gipuzkoa, and which is located in a valley surrounded by mountains in the center, geographically, of the autonomous community of the Basque Country. The old part of the town has many buildings of great artistic value. Gothic, Renaissance and Baroque are all represented in its monuments, for which it is often referred to as “the Basque Toledo.” The University of Oñati, where the IISL is located, was founded in 1548 and remained until 1901, becoming the only University in the Basque Country at that time. 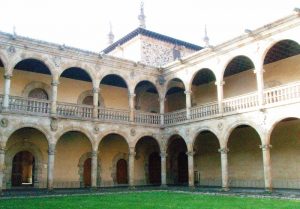 University of Sancti Spiritus of Oñati, Headquarters of the IISL

The greeting I have started this article with, takes on a very special significance if we consider the current state Sociology of Law studies in Spain. Because, while there has been a slight amount of progress, in my view, the opinion of Manuel Calvo, Sociologist of Aragonese law, and former scientific director of the IISL (from 2002-2003) regarding the status of Spanish Sociology of Law in the mid-1990s, saying that the discipline 20 years ago was characterized as one with a lack of development, is still true today.

Indeed, despite the relentless efforts of our work in this area by obtaining its full academic and scientific institutionalization, currently the situation in this discipline continues to be “difficult”. Regarding law schools, although the introduction of Sociology of Law (as an optional subject) in many curricula established a sign of hope, yet the truth is that research in Sociology of Law has failed to take off; or, in other words, is still scarce, scattered and questioned by faculty members.

Given the scenario that we have just outlined, it is easy to understand how important the work of IISL is, from the point of view of the awaited scientific institutionalization of this discipline in Spain. Being a point of encounter and main reference for scholars in the discipline, the Institute has become an international forum of reflection and high level scientific debate, and an invaluable focus of research production on the Sociology of Law. According to data made public by the IISL Convention in May 2014, during the past 25 years, more than 15,000 researchers have visited Oñati. 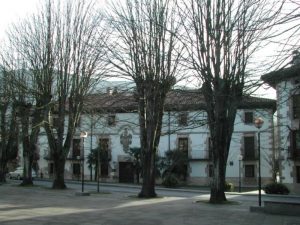 Antía Palace, Residence of the IISL for students, faculty and visitors

Certainly, the Institute offers an ideal location, the beautiful building of the old Sancti Spiritus University, for the organization of workshops and meetings of small groups of researchers. The use of the old University building was granted to the IISL by the Diputación Foral de Gipuzkoa (the Government of the province). The Oñati City Council, granted the use of the Antía Palace to the IISL, an 18th century building, allowing the Institute to offer more than comfortable accommodation to students, faculty and visitors.

In addition, since the beginning of its operation the IISL offers an International Master’s degree in Sociology of Law, a year-long program officially recognized by the University of the Basque Country, and aimed at graduates in law, sociology, or other social science candidates, in which more than 400 students from 64 countries, and about 160 professors from 27 different countries have already participated. It is remarkable and commendable that for a few years now, professors who have taught in the Master’s program have renounced or generously donated back to the program their agreed upon salaries intended for student scholarships.

It should be noted, also, that the IISL houses a legal sociology library which is undoubtedly one of the best in the world in this field, comprising an excellent collection of books, journals, electronic resources, and other materials. Finally, the IISL offers a space for the publication of Sociology of Law research, and has published various electronic magazines, such as, Sortuz: Oñati Journal of Emergent Socio-Legal Studies, and the Oñati Socio-Legal Series.

Participants at one of the IISL Workshops

However, the preceding considerations around the enormous value of the activity developed by the IISL for 25 years should not be used as a pretext to avoid the reflection and debate about what has to be the current and future role of the Institute in a context in which Basque public institutions have decidedly opted for the implantation of a university model based on innovation, quality and excellence.

The current scientific director of the IISL, Professor Adam Czarnota, referred to this issue when, in an interview published in a journal of maximum exposure in Gipuzkoa, after declaring that his period in Oñati has been “complicated, but satisfying and conducive to reflection on the role of the Institute today,” he affirmed that “it is a stage of survival, but we have objectives.” And, as for me, I am convinced that this is the case: I firmly believe that the IISL will know how to face all the challenges that it faces, and that it will be reinforced throughout the process, and just as during the last quarter of a century, looking forward it will continue being the center of gravity of the discipline worldwide.

Be the first to comment on "Oñati, Sociology of Law “World Capital”"