Who would have thought that a minority language like ours would end up having such exposure and presence on the Internet since that day in 2001 when a volunteer translated the “I’m feeling lucky” button for the famous Google search engine? Since then, many of us Basque-speakers have contributed in varying degrees so that the Basque language would now have a noticeable presence on the world wide web.

It´s worth noting the teamwork through all these years, the collaborative effort to promote a language used by just under one million speakers. Highlighting some of its achievements in terms of its presence on the web, this number is certainly not in proportion to its Internet presence, since the Basque language currently is the most Tweeted minority language according to the rating of Indigenous Tweets or number 33 in the Wikipedia ranking, based on its total number of articles, currently reaching 152,000.

In this collective effort, we point out the enormous contribution of Librezale, a group which, through a mailing list, has done amazing work in the translation of free software. Their most important contributions include the Firefox or Chromium browsers, the well-known blogging platform, WordPress, the application for the creation of micro blogs, StatusNet, the image editing program, Tux Paint, the Pootle application that enables translations to be done in a collective manner, Thunderbird for e-mail, Mailman, the popular application to manage mailing lists and countless applications more for sound and video, calendar, P2P networks, games, etc. 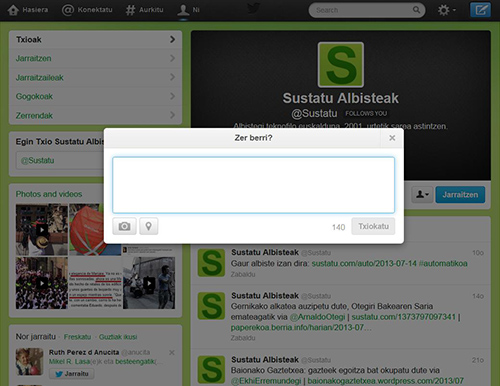 The first translation of the Google search interface was also done in a collaborative effort in 2002. Since then, Google has used its own systems and professional translation to update that product or translate others (Youtube and Gmail, among other applications, are in Basque), but the formula that a volunteer, Gari Araolaza, proposed for the famous “I´m feeling lucky” button (“baietz lehenengoan”, literally “a yes on the first try”) is still right on the first page of the famous search engine.

The famous micro blogging service, Twitter, was also translated in a collaborative way. The label twittereuskaraz (Twitter in Basque) and the campaign initiated by Lander Arbelaitz on act.ly with 5,345 requests and almost 250,000 tweets were the main trigger that would open the door to translations of our language for this network that today has more than 5,000 active users Tweeting in Basque. Although the process ended up being a long one due to translation of the micro blogging service, it is worth mentioning that during the first three days, 80% of that application was already translated. Even though the Twitter interface was being translated in 2012, Twitter does not have Basque in its language detection on tweets, nor does it produce trending topics in Basque. However the native application Umap.eu, filters the content of Twitter in the Basque language and extracts the trending topics on a daily basis, in addition to providing a ranking of Basque speakers amongst Twitter users.

Similarly, Basque speaking subscribers can use the social networking site Facebook in Basque, also translated collaboratively, and these days a campaign is ongoing and about to be completed for the translation of the Android operating system. We can hypothesize, therefore, that soon the Linux-based operating system will be available in our language. Another interesting initiative in this area is Azpitituluak.com, a collaborative project that emerged in 2008 to produce subtitles in Basque, and so far has a catalogue of some 400 movies and several series.

Along with these collective processes, individuals are carrying out various translation projects of mobile applications (for example, you can play the popular game Angry Words in Basque), computer graphics, presentations, interviews, etc. Finally, after several years of work, the Organization ICANN recently approved the .eus domain for the Community of Language and Basque Culture and we expect that the domain will be operating soon, so sites and web pages can be registered under the domain .eus in April 2014. Great news for all those who have supported the campaign and see that the adoption and use of the domain can expand the visibility of our language.

All these personal and collective efforts, along with the support of all levels of Basque public administration, helps the Basque language to thrive on the Web and enables its users to feel, on one hand, proud to be able to use principal programs and applications in our language, and on the other hand, optimistic about the future since this contributes to the standardization of the Basque language. These people, who, with their effort have contributed to the presence of the Basque language on the Internet, have also opened our eyes, and the pathway to future translations: “If we want to, we can”.

Be the first to comment on "Basque Language on the Web: Making an Impact"