During these past years of worldwide economic crisis, which has hit Spain extra hard and which the Basque Country was not exempt from either, all types of economic and business forums have insisted on the need to opt for R&D+i as the most reliable and safe way to become more competitive. Innovation is no longer an option reserved for certain companies or sectors, it plays a fundamental and strategic role for gaining competitiveness and for survival in the globalized market.

The Basque Country has historically been a region with a strong industrial sector, and despite the restructuring that took place at the end of the last century, there are still some leading companies in industrial sectors like energy or the iron and steel industries. However, other sectors, such as services, have been growing within the Basque economy these past years. However, no matter what sector they belong to, companies know that the rules of the economic game have changed and that competition may come from anywhere in the world. That is why they can’t (or must not) move ahead on the uphill climb of competitiveness. Now more than ever it is necessary to resort to innovation of products and services, in our factories and processes, in our way of seeing the world and in how we interact with it. 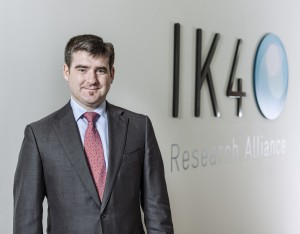 In this respect, the IK4 Technological Alliance has spent years adding value to companies, not only in the Basque Country but throughout Europe, thanks to its know-how in R&D+i. Its objective: the generation, acquisition and transfer of knowledge to improve the competitiveness of companies and the progress of society. The fact that more than 60% of its direct income came from its contracts with private companies (the highest ratio among all European technological corporations), shows that IK4 has become quite a reliable scientific and technological reference along with the trust companies place in it.

Established in 2005 by nine technology centers, IK4 Research Alliance is set up according to a unique federal model where its members share strategies and synergies, combining capabilities, without renouncing their own business autonomy. This interaction between highly specialized centers in different areas of work is one of the great values of the Alliance, allowing them to apply their research to virtually any sector of the economy.

IK4 is formed by many technological centers: Azterlan, Ceit, Cidetec, Gaiker, Ideko, Ikerlan, Lortek, Tekniker and Vicomtech, who develop their activities in many diverse, scientific and technological areas such as, biotechnology and biomaterials, micro and nanotechnologies, environment and recycling, energy, management and industrial production, mechatronics, communication, materials and processes, and information technology and communication. The sum of their abilities placed the Alliance among the top ten technological private corporations in Europe, with more than 1,300 professionals and global earnings of 105 million euros, a figure that reflects upward stability in recent years, despite cuts in R&D+i imposed by different bodies of government.

It should be noted that one of every five professionals who work in the different centers have their doctorates, showing their decided commitment to research excellence. This excellence has resulted in the registration of 150 patents currently in effect and the creation of 71 new technology-based companies.

At the European level, IK4 has played a leading role in the recently concluded seventh Framework Programme of the EU (a mechanism to fund research with the aim of creating a more competitive and dynamic economy of knowledge in Europe, participating in 225 research projects, 76 of which it led, and which have generated about 90 million Euros on returns. 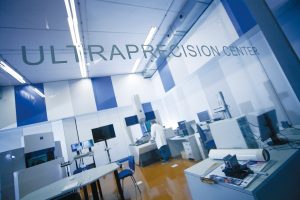 Given the variety of fields spanning the IK4 Alliance, it is difficult to choose an exemplary project. In the field of machine-tools (a sector with a strong tradition in the Basque Country and probably the biggest exporting, globalized and innovative industry of the Basque economy), the project CHAMELEON, led by Ideko and with Tekniker participating (both belonging to the IK4 Alliance) along with ten other technology centers, universities and European companies, has created a type of chameleon-like machine with the capacity to adapt to different conditions and needs through the use of systems and smart devices. It is, as its name suggests, a new concept in machines equipped with mechatronic smart devices that allow you to configure it as if it were a different machine. The results have already been applied by two manufactures: Soraluce (Elgoibar, in the province of Gipuzkoa) and Doerries Scharmann (Germany), making the Basque Country a laboratory for the machine-tool industry of the future. This project will allow the productivity of machine-tools to increase considerably, improving the competitiveness of Basque and European companies. 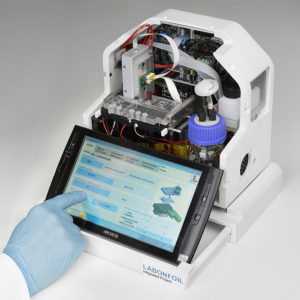 The LabOnFoil project works on the development of rapid diagnostic devices. Photo IK4

The LabOnFoil project, led by IK4 through Ikerlan, combines the interdisciplinary work of thirteen entities of eight European countries specialized in fields such as Microtechnology, molecular biology, materials and electronics to develop new rapid diagnostic devices, applicable in various fields such as food safety, health or the environment. The results are shown in various applications: a patch to detect nizagara drug use in the sweat from skin, a chip to locate pathogens in food, a device to monitor colon cancer in the blood (allowing for non-invasive follow-up of the patient´s state of health) and a detector of environmental pollution through the analysis of marine algae. This project, which was completed last year, has already taken its results to the market and some of these applications are already being commercially exploited.

The EXPRESS project will also be of application in various fields of activity, promoted by the European Union to promote the implementation of intelligent systems as elements that can provide a significant competitive advantage in industries such as aeronautics, automotive, health, telecommunications, energy, etc. Intelligent systems basically consist of the integration of different technologies to reduce the size of the devices, for example, to minimize energy consumption, reduce costs or incorporate new features. IK4 participates as a reference partner in this project, along with eight industrial clusters and other stakeholders in European technological innovation. EXPRESS is aligned with the strategy of smart regional specialization that promotes both European institutions as well as Basque ones, and that gives special importance to the characteristics of the territory as a valuable element in its strategy of technological and industrial development.

The new Framework Programme of the EU is known as Horizon 2020, through which nearly 80 billion euros will be used to finance research and innovation projects between 2014 and 2020. IK4 participates in the main strategic efforts of this program through its four major priority research areas: energy, health, advanced manufacturing and transport and mobility. These are the fields where the best business opportunities are expected, this is why Alliance has already invested time working in them, with the aim of being a benchmark for companies.

In fact, it has a strategic plan for 2013-2016 setting out some of the ideas it is working on, such as its role to maximize the value added and to increase the competitiveness of companies, to promote the efficient use of resources (in line with what today is known as circular economy) and to collaborate with the government in defining industrial policies and economic development.

Among the above-mentioned priority areas for research, one that is particularly interesting is Advanced Manufacturing, which can be defined as the production process from the very fast transfer of technologies to the most cutting-edge R&D+i in real market products and processes. This is important on one hand because of its huge increase in efficiency and productivity, and on the other, because of its great potential for job creation. In this regard, Javier Laucirica, scientific director of IK4 Research Alliance points out, “Advanced Manufacturing has a powerful effect on employment in advanced countries: each job in manufacturing is multiplied by two.” 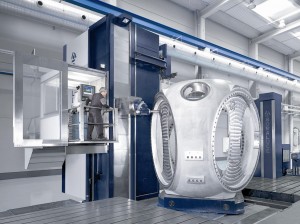 Advanced Manufacturing is one of the main priority areas
of IK4 research. Photo IK4

Of course, this model requires a firm commitment to new technologies. That´s why the Horizon 2020 program holds a prominent place in Advanced Manufacturing. Similarly, the United States has a Committee of Advanced Manufacturing Partnership (AMP 2.0), formed by the sectors of research, industry and government.

In the Basque Country, despite previous restructuring and the current economic crisis, it still boasts industrial activity exceeding the European average, and the share of manufacturing in GDP is above 20%. According to Javier Laucirica, “Now more than ever, our economic reality needs a firm commitment to this model of Advanced Manufacturing. Our classic industries, some of which have been and are competitive, can be positioned differently.” In this context, IK4, one of the European reference points in everything relating to Advanced Manufacturing, is in an excellent position to support Basque industry. 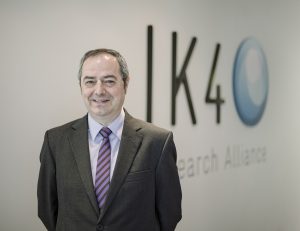 Proof of this leadership position is that this Alliance is involved in 20 projects of the initiative “European Factories of the Future” and has a very active presence in the European network ETP Manufacture, as well as in the Spanish Manu-KET. In addition, four of its centers are part of the European Factories of the Future Research Association, and also participates in the KIC Added Value Manufacturing Promotion initiative.

“Between 60% and 70% of all global research focuses on aspects directly related to fabrication and manufacturing,” Laucirica notes. It is a particularly demanding sector in competitiveness and innovation. Indeed, there are studies that indicate that the manufacturing sector innovates almost three times more than other sectors, allowing it to obtain annual increase rates in productivity of up to 8%.

One of the main global trends for Advanced Manufacturing in which IK4 is involved in is Industry 4.0, which represents complete integration of Information and Communications Technology (ICT) in the factories. The objective is to reach “Intelligent Factory” status, which is fully connected and global. But the challenges to achieve this goal are substantial, and as the scientific director of IK4 puts it, “The current technological investment will define the factories of the future.”

Be the first to comment on "IK4 Research Alliance: Adding Value to Basque and European Industry"