Reporting on all the events taking place in the Basque Diaspora for more than one decade. Euskalkultura.com is a pioneering initiative that began as a magazine and was transformed to a website in 2001 as a reference for anyone who wants daily information in English, Basque and Spanish about the Basque diaspora.

The Basque diaspora is the large family of people linked by culture and Basque sentiment in different ways, distributed all over the world with a presence on five continents. As its basis are the ‘Euskal Etxeas’ or Basque Centers, places where people gather and perform different Basque related cultural, culinary, political and social activities. Currently there are over two hundred Basque Centers dispersed around the world, half in Latin America and nearly fifty in the United States of America.

The philosophy of Euskalkultura.com since its inception has been to transmit this very active Basque reality and bring it out of the unknown. “People have likely seen something on television or radio about the Basque diaspora, but always about the same places without real knowledge of the amplitude, the characteristics as well as of the real contribution of the Basque diaspora with a past, present and future that didn’t seem to exist. Consequently, Euskalkultura.com was created precisely to be able to take a snapshot of that reality and reflect all the people working in the Basque orbit because, if not captured, it will be lost”, Joseba Etxarri, Director and Founder of Euskalkultura.com and native of Gipuzkoa explains in detail. 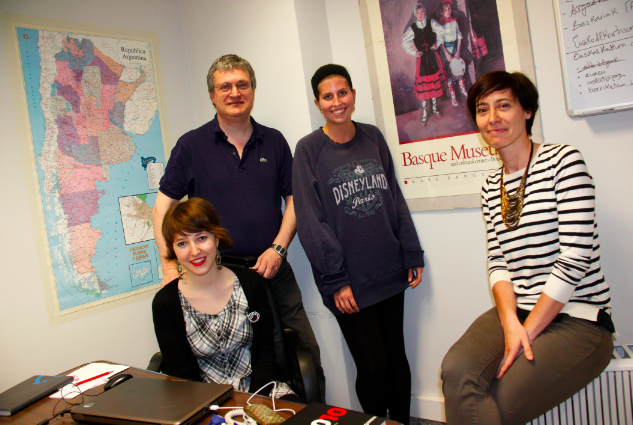 This effort to give presence to the Basque communities on the Internet began in 1998 as a quarterly magazine called Euskal Kultura, published in Chile. It was edited by ‘Euskeraren aldeko Euskal Fundazioa’, a foundation led by Joseba Intsausti and was supported by the entrepreneur Juan Celaya, but it was a very expensive publication with a slow dissemination so the logical thing to do was to transition to the Internet, which it did in 2001.

“Beginnings are always difficult and this case is no exception, because in 2001, merely sending a photograph was not an easy process,” says the director. At that time Bego Miñaur appears, editor of Euskalkultura.com, joining the company in 2004: “Our problem has always been that we have done this, as they say in Argentina, ‘a pulmón’ (on your own, without an oxygen tank)”. Etxarri adds that “It was pretty crazy. We had very limited resources initially, without financial support, but we clearly saw that we had to give a voice to those who were voluntarily doing things.”

The expansion of the Internet all over the world in the last decade has led to the incorporation of the Basque Centers to the network, so the amount of news and participation in Euskalkultura.com has increased considerably. “In addition, over the years, people get to know you and realize that they can count on you,” explains Miñaur. In addition, from the view of the founder of the page, “Only a small percent of what Basque Clubs do is documented, and it is important that it is all collected, so that down the road, within fifteen or twenty years, if anyone wants to research, or know more, it can be done”.

A Variety of Activities

Apart from these services, Euskalkultura also performs various activities: “We advise, we take part in projects and we have organized programs, performances as well as trips to the United States and Argentina. We are in permanent contact with Basque communities, Basque clubs and the Basques in Europe who want to interact with companies in other places”, Etxarri underscores. In addition, they currently collaborate in the dissemination of information on such activities with radio stations Bizkaia Irratia and Onda Vasca, and the weekly radio station Herria of Iparralde (North Basque Country) as well as mounting stands and giving lectures in different places.

The website is divided into three completely different versions: English, Basque and Spanish. Also, they issue a daily newsletter in Basque and Spanish as well as a weekly English newsletter which state, “We focus on the Basque Clubs, but we also inform about many topics that go beyond the clubs, such as papers of writers or poets outside the Basque Country, symposiums, information at the Center for Basque Studies…”.

Basques from the Northern Basque Region and the First World War: Shooting at Smiles

“Remonte”: a Modality of Basque Pelota Fighting to Survive

Be the first to comment on "“Euskalkultura.com” The Informative Reference on the Basque Diaspora"