The Spanish Territorial Design: A Straight Way to Misrecognition
The Spanish Kingdom has historically been a plural State where many national identities have coexisted in several political arrangements. The constituent process after Franco’s Dictatorship tried to somehow capture this historical plurality in order to keep the unity of the Spanish Kingdom while pleasing the so called historical nation’s wishes of recognition. In order to reach that goal – although not only –, the Estado de las Autonomías, a semi-federal territorial organization compounded by 17 Autonomous Communities was established: three of them were constitutionally recognized as “historical nationalities”, while the rest were called “regions”. The distinction between nationalities and regions was also supposed to have its effects on the process through which communities could acquire their autonomy and the extent –at least before the generalization of the doctrine of coffee for all: the trend to homogenize the State – of that autonomy. The Constitution considers a fast and a slow track to acquire autonomy in the articles 151 and 143.1 respectively, an autonomy that is materialized in Autonomy Statute texts. The fast track was thought to meet, as soon as possible, the Catalan, Basque and, to a certain extent, the Galician claims for autonomy, while the slow track was designed to be used by the rest of the territories at a softer level. What has the final result of this constitutional design been? 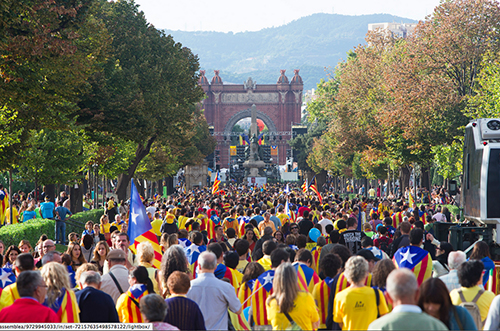 This past September 11th, 1,600,000 Catalans called for independence with a human chain reaching 400 km.| Photo: Assemblea.cat/

The objective of the political organization was conceding self-government levels that covered the intrinsically asymmetric – from a national diversity perspective – Spanish state. However, the development of this Semi-federal State model that originally gathered its pluri-nationality, tended to be a progressive symmetrical design provided that the Autonomous Communities which would achieve political autonomy by the slower route expressed a wish (as was expected and did in fact become a reality from the 1990s onwards) to have a greater degree of self-government. Nevertheless, there were some asymmetries that were recognized in the legal framework. However, as renowned Political Science Professor Ferran Requejo expressed in a recent article on the topic, “the exceptions were the so-called “differentiating factors”: a heterogeneous set of issues not necessarily related to the pluri-national nature of the state, each one of which required specific treatment (languages, insularity, special civil laws, etc). On the other hand, the most asymmetrical legal characteristic of the system is the economic, with the Basque and Navarrese Autonomous Community’s Forality (a singular tax model in which these two communities collect their own taxes, leading to a higher level of fiscal autonomy)”.

The Autonomy Statute Reform and Fiscal Pact Failed Processes
This territorial arrangement did not satisfy neither the majority of citizens from Catalonia nor from the Basque Country, leading to years of permanent struggle between the state and the historical nationalities’ political institutions and civil society. In the particular case of the Catalan Nationalist movements, as well as the traditionally secessionist minority, they appeared long ago. However, the current rise of Secessionist Movements could be actually explained based on two main recent events: the Catalan Statue of Autonomy reform process and the failed Fiscal Pact attempt. Regarding the first one and according to the synthesis done by Professor Requejo himself, there were three main objectives of the Catalan Statute of Autonomy reform (the original dates from 1979) written up by a Catalan parliamentary commission in 2004. The first goal was to increase the symbolic and political recognition of Catalonia as a distinct national reality within the Spanish state. The second aim was increasing the level of self-government of the Catalan institutions and establishing a higher degree of protection in the Constitutional Court. The third and final objective was to improve the finance system through which Catalonia bored – and keeps boring – a fiscal deficit following inter-territorial transfers. 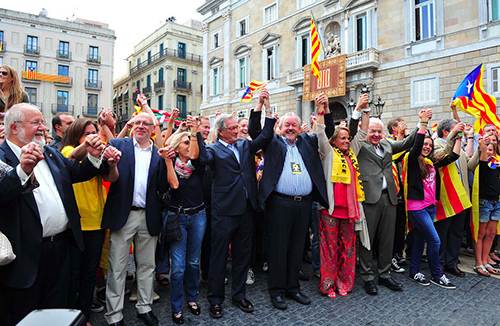 Another view of the human chain of September 11, the National Day of Catalonia.| Photo: Assemblea.cat/

Explaining the whole political, juridical and social process surrounding the Catalan Statute Reform will imply hundreds of pages. It was approved by the Catalan Parliament, the Spanish Congress and the citizens from Catalonia (via referendum). During the whole process the Spanish conservative party Partido Popular tried to abrogate the reform and they finally somehow managed to do it: the Constitutional Court – highly questioned because of their partiality – declared a significant part of the reform in 2010 unconstitutional, mainly those aspects referred to the recognition of the Catalan nation itself. In any case, the most relevant thing is that both during and after the reform process, a majority of the Catalan society showed its rejection to the process of harassment led from Madrid and the subsequent juridical sentence of the Constitutional Court. They represented this not only by a massive demonstration on July 10, 2010 but also expressing their repudiation in each and every pool (as well as in the just-after-Constitutional Court-sentence elections, when political parties disagreeing with the sentence obtained ¾ of the votes).

The Catalan Statute Reform process also let a pending matter which is nuclear for understanding the final rise of the process: the fiscal balances agreement between the State and the Autonomous Community were put off. Nevertheless, the Catalan Government elected on 2010 considered this issue a central matter and placed it in the core of the political debate. On September 11, 2012 they even tried to link the traditional Catalonia’s Day secessionist demonstration to this demand, although a civic organization called Catalan National Assembly (as well as some other associations, including smaller political parties) maintained the secessionist demand making it the hugest secessionist demonstration in democracy (the motto of the demonstration was “Catalonia, New European State”). Nine days after the demonstration, Spanish and Catalan presidents met to negotiate a new so called Fiscal Pact, this is to say, a new distribution order between what citizens of Catalonia pay in taxes and what the State gives back (both as payment and as investments). The negotiation failed and the Catalan President called elections with a single goal: moving towards a secessionist referendum.

The Basque Government’s Own Political Path
In that scenario, the Basque Government – right now led by EAJ-PNV, moderate nationalist party – has been somehow obliged to define its own position. Both of the previous attempts to rethink the Basque-Spain relation ruled by the former Lehendakari Juan José Ibarretxe (approved in the parliament in 2004 and 2008) were already stopped by the Spanish legal and political framework without even negotiating them. Leaving aside the frustration this generated in Basque civil society and the fact that the moderate nationalists left the Government right after the last attempt, there are several other elements that make the Basque process unique:

The first one is the existence of a Fiscal Pact built in asymmetric federal terms, i.e. negotiated in almost bilateral terms between the State and the Basque Government. It was agreed when the Constitution was signed as a way of giving back the autonomy that once was taken from the Basque people. The Catalans originally refused to agree on a fiscal pact in those terms. The second difference is the existence of a Left Wing Secessionist Terrorist group (E.T.A.) during almost the whole democratic period, with hundreds of deaths along the way. Even though in Catalonia there had been several violent groups in democracy, their impact was residual (in political terms, as no death is residual on itself) compared to the Basque movement and they disappeared in the early 90s. The last difference we may underline – as this is not an exhaustive list – will be the exceptional juridical, political and political management of left wing secessionist social and political movements from the State’s institutions during the democratic period, including state terrorism episodes, unconstitutional juridical and legal measures or even torture cases. All together with the terrorist violence – although both issues cannot be given the same weight, as the Terrorist incidence was much more noxious both in quantitative and qualitative terms – this generated a conflict scenario in which developing democratic political projects has been a deeply complex issue. Basque politics, in that sense, is still recovering from those decades’ nightmare.

Considering this factor (among many others) each one on its own relevance, the Basque Government seems more reluctant to start a strong secessionist process: first, because from a legal and institutional framework perspective, the starting point is different in each case as the Basque Autonomous Community has a de facto higher level of self-government based on the main federal principle: pact (foedus); secondly, because the resolution of the conflict, with the definitive cease fire and its consequences, is still an ongoing issue and the resulting deep wounds are still open. Finally, because the socio-political situation (with the economic crisis and a parliament ruled by a minority government, as well as with a relatively calmed civil society with regard to secession, according to the pools) is not pushing to a process that usually tends to radicalize the political discourse.

In conclusion, while the Catalans are somehow committed to begin a strong process after the attitude showed by the Central Government with regard to the Autonomy Statute reform and the Fiscal Pact attempt, the Basque moderate nationalists and their current government have a margin to rethink the relationship with the State in a softer process. As Ferran Requejo himself expressed, Catalonia is facing a corner situation: either they are able to make a decision regarding their own future in institutional terms or their singularity as an institutionalized people is in serious risk of dissolving in the Spanish legal, political and even cultural framework. A situation that, fortunately and because of the reasons I have briefly pointed, is not so near in the Basque case.

This Is an Indie World