When World War I broke out, the majority of European countries became involved, one block against another. But there were also some who stayed neutral and among them was Spain. Spanish society was quite divided about the new war. Some were firm supporters of neutrality, since Spain had neither money, nor a powerful army, and nothing to gain from it. The rest were divided into two: some were leaning clearly toward France and England, the allies; the others toward Germany. 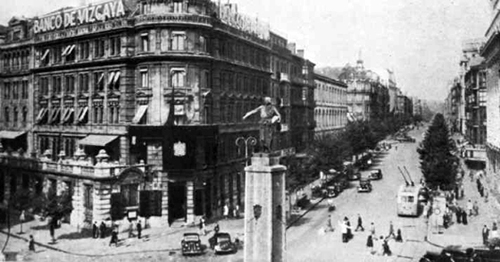 The Banco de Vizcaya, which had a large increase in profits in WWI, Photo: wikimedia

In the Basque Country and Catalonia there were more supporters of France, among other reasons, because France was the neighboring country. But key figures of Basque culture like writer, musician and priest Resurrección María Azkue were germanophiles. And he was not the only one: Luis Arana Goiri, President of the Basque Nationalist Party (PNV), leaned toward Germany. However, another member of the same party, the businessman Ramón de la Sota, was a supporter of the British, since his company was a ship supplier for them. Likewise, many members of PNV were supporters of the allies, as you can see in writings of the nationalist daily Euzkadi, run by supporters of the allies. In addition, we need to keep in mind that there were between 100 and 300 volunteers for the Foreign Legion in France from the Southern Basque Country.

PNV members also claimed major reasons to be against war, reminding us that a war is a huge massacre. They also advocated neutrality driven by their patriotic position, since they warned that entering the war in favor of Germany meant Basques fighting against fellow Basques. But above all was the very important economical factor, when it came to advocating neutrality. For the daily Euzkadi, the Basque Country had no interest in positioning itself in favor of one side or the other. One of the reasons for not entering the war was economic, because it allowed the possibility of sailing the seas at ease; however, this tendency of Basque Nationalism believed that if Spain entered in war, Basque industry would be paralyzed.

The people of Bizkaia and Gipuzkoa wanted to navigate safely. For fishermen from the province of Gipuzkoa, Spain´s neutrality was a clear benefit, since they could fish a lot even with old ships, replacing sailing ships with steam boats. The introduction of motorized boats meant a change in the structure of the companies at the same time. New partnerships replaced family businesses; the owners of new businesses created in San Sebastián were mainly from Madrid and Bizkaia. These owners left the port of San Sebastián, leaving it in the hands of the coastal fishermen. The deep sea fishermen went to Pasaia.

But the new economic situation did not benefit all sectors. In the period of the war, no new companies were created in San Sebastian because European investments were stopped almost entirely. In the mining sector a large decline in activity was also experienced between 1914 and 1920. The same thing happened in tourism and construction between 1914 and 1930. The sector which experienced substantial positive growth was shipbuilding, since businessmen from Bilbao, Galicia and Catalonia invested capital in the province of Gipuzkoa. The company “Compañía Naviera Gipuzcoana” was the one with the most profit: it began in 1916 with 4.5 million pesetas of capital and within a year already had 19.5 million pesetas in capital. 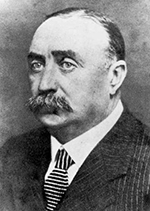 But, without a doubt, the territory that prospered the most thanks to the war and through its shipyards, was Bizkaia, particularly Bilbao and its surroundings. At the beginning of the war there was great concern, above all because of the lack of security. Also there was no raw material. In the Bilbao stock exchange they were very nervous and even the Barcelona stock exchange was closed. But the economic situation changed rather quickly because, starting from 1915, the textile sector began to see growth, for example in Barcelona. Then the chemical and pharmaceutical industry began to develop. The coal mines also began to see growth, both in number of companies and workers´ salaries. The rise in prices was substantial and company profits doubled and tripled. The production of the arms industry in Eibar (Gipuzkoa) also climbed, although this was not the sector with the largest increases.

Companies of Bizkaia invested an annual capital of between 5 and 50 million pesetas until 1915. However, in 1917 the invested capital was 164 million and in 1918, 427 million. And this huge increase was noted particularly in the banking sector, which doubled profits in 1918 and tripled them in 1919. There was also a large increase in the steel industry, which tripled the value of production between 1914 and 1916.

The sector that earned the largest profits was the shipbuilding sector, both shipbuilding and maritime transport. With the imbalance of supply and demand in international maritime transport, due to the change of the regular lines produced by the change of the conditions of navigability, the situation of Spanish shipping changed drastically. Ships and German submarines destroyed some English cargo ships and thereby tons of merchandise disappeared. For this reason, Spanish maritime transport grew between 500% and 700%. In 1916, the cash profit was 2,729% greater than in 1910. And the increase for Spain was mostly in Bilbao, since in the port of Bilbao as many boats were registered as in all of Spain. The largest company was Sota & Aznar, who went from a 2.5 million peseta profit in 1914 to 35 million pesetas in 1918.

The impact of this impressive economic development was also felt in the stock exchange of Bilbao, where the price of shares was multiplied by 2.3 in the period between 1915 and 1919. That growth occurred because, during that period, capital and investments were accumulated. Banking in Bilbao also noted the influence of this immense growth. Banco de Vizcaya had a capital increase between the years 1914 and 1920 from 8.5 million pesetas to 20 million pesetas.

However, when the war ended the economic situation returned to its origins in 1920. A hard hit, especially in the shipbuilding industry. The sale of ships fell dramatically. Businessmen tried to maintain prices but it was impossible. Consumption declined. The crisis spread to all sectors and large declines occurred in the stock market. Small businesses disappeared.

But while there were huge profits, the strength of Basque Nationalism also grew in Bizkaia. In that context, PNV won the election of 1917 comfortably, monopolizing nearly all representative seats in the provincial Council of the province of Bizkaia.

The Smithsonian Folklife Festival: Another Voyage in Basques’ New Age of Exploration

1 Comment on "Basques from the Southern Basque Region and the First World War: an Opportunity for Growth"