The first graduating class of the Basque Culinary Center (BCC) is ready to compete in the demanding world of food and gastronomy. This last July 6, the first 54 students from this pioneering gastronomy and culinary arts department graduated with the endorsement of some of the best chefs in the world, drivers and sponsors of a project that has actually made this dream come true of making gastronomy a university discipline. 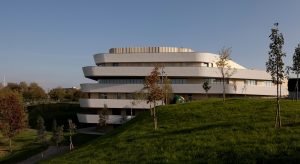 The location choice of San Sebastian for building a highly qualified culinary training center did not happen by chance. Nothing better than gastronomy to locate San Sebastian on the international map. The Michelin stars of famous chefs and restaurants, gastronomic temples where sybarite customers from the most unexpected places of the globe make pilgrimages in search of avant-garde cuisine, put the shine on a gastronomic culture that reaches the entire society of San Sebastian and Gipuzkoa. Here, eating is much more than a necessity for survival, it is in the DNA.

In San Sebastian, and by extension in the Basque Country, gastronomy is worshiped. Food is present in the well-known cuisine of its countless restaurants with varied styles, from the most lustrous to the more modest; in its bars and taverns with its lush tapas, this miniature cuisine that has become a tourist attraction in its own right and which constitutes one of the most remarkable contributions of Basque cuisine. Then there are the countless culinary societies, where friends and family gather to give a good account of culinary preparations that have little to envy of professional chefs. 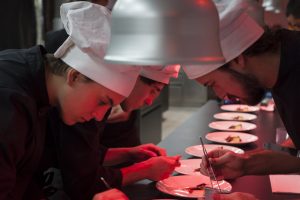 Gastronomy has always had an untouchable role in the festivities of any Basque town, either in the form of large-scale community meals in public settings, public tastings or culinary competitions of all kinds. City Councils, aware of the pull of gastronomy, organize all kinds of related events to animate its streets and attract visitors. Throughout the year, fairs for beef, or fish such as sea bream, anchovy, mackerel or tuna, barbecues, beans, or cheese contests are held… In the end, the sum of all of these manage to cover a year’s calendar, a list of activities that are collected and reported extensively by the local media, who cover gastronomy, in all its forms, dedicating large spaces to its coverage.

But for a tourist town like San Sebastian, and by extension to a Basque land that now has finished the turbulent years of violence, is observing how the contribution of tourism to the GDP is growing every year, with its culinary heritage now becoming a key factor. And the BCC is the mine that will extract the best material to support Basque cuisine at the global forefront.

The impulse of well known chefs

The BCC is a project that embodies the visionary aspiration of cooks that revolutionized Basque cuisine at the beginning of the 1980s. Names such as Juan Mari Arzak, Pedro Subijana, Hilario Arbelaitz, Martín Berasategui or Karlos Arguiñano, protagonists of the Basque culinary explosion, are professionals who have perfected their craft to place it at the global forefront through a mixture of talent, work and experience. Hence, surely, the conviction of the need in the Basque Country for a high level training center aimed at shaping professionals able to respond to the challenges already knocking at the door of the booming sector of food and gastronomy. Almost two decades ago they were leading the way and went to public institutions with this project to provide the Basque Country´s first university training center for gastronomy and culinary arts. 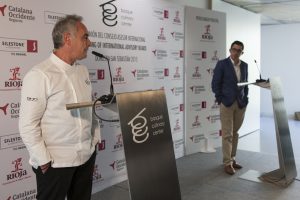 The endorsement of such a cast of chefs has been key to the reality of this project, and besides a similar example in Italy, it is unmatched in Europe. The Board of the BCC, in addition to promoting institutions, companies in the food sector, and the Mondragon University, include Juan Mari Arzak, Martín Berasategui, Pedro Subijana, Karlos Arguiñano, Andoni Luis Aduriz, Hilario Arbelaitz and Eneko Atxa. From abroad and forming the International Advisory Board of the BCC, are chefs from the likes of Ferrá Adriá, René Redzepi, Joan Roca, Yukio Hattori, Michel Bras, Dan Barber, Gaston Acurio, Alex Atala, Heston Blumenthal, Masimo Bottura and Enrique Olvera.

Initial funding was provided by the main Basque administrations and the Spanish Government. Together they contributed 17 million euros covering the startup costs as well as the site where the modern and avant-garde building was built, which resembles a stack of dishes. Located in San Sebastian, in the Miramón Technology Park, an area that is home to some of the most advanced research, industrial and business centers in the Basque Country. The management and organization of the BCC, both its university facility as well as the equipment and services, is the responsibility of Mondragon University, the youngest of the Basque universities, driven by the powerful Mondragon Corporation cooperative world.

Joxe Mari Aizega is the director of the BCC. As he explains, the BCC has been conceived and developed without copying any model nor franchised by anyone, but from a pure Basque personality, rooted in the Basque Country but, at the same time, completely modern. “This is why there had to be a huge effort to get top chefs, University professors, and people from the world of enterprise, research… to design the entire project and the university degree.”

The degree issued by the program is adapted to the European educational space, and is a four-year program developed on four axes of knowledge: cooking and dining, business management, science and technology, and culture and art. Six lines of research are developed on these four major areas: education and eating habits, sensory experience, food tendencies, innovation in management of companies in the sector, development of associated technologies and elaboration, and presentation and preservation of foods.

During the third year, students are separated by specialties, which in the case of the BCC provides three itineraries: Culinary Vanguard, Innovation, Business and Entrepreneurship, and Food Industry. The BCC policymakers recognize that when the first group of students joined the project, nearly nine of every ten students did so under the impulse to become chefs. However, two years after this initial aspiration these needs shifted and opened up to the wide range of career possibilities that the culinary sector offers. In fact, almost half of the first batch of graduates opted for the gourmet business line, surpassing the choice for culinary creation. 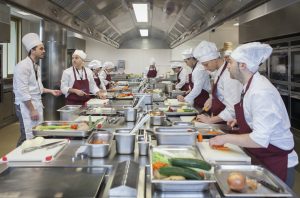 Ready to make the leap into the professional world, the first batch of graduates of the BCC range from chefs to restaurant managers, from directors of services and customer service in restaurants to food production Managers in catering, or technical research in the agri-food sector, or culinary consultants, consultants and promoters of new initiatives or communications specialists.

In summary, studies of the BCC provide students a title aimed at covering all the needs for training qualified professional profiles, responding to current challenges and contributing scientific and technical insight from a new interdisciplinary approach to learning. The main objective of BCC is to train professionals who design, implement and monitor business and culinary processes and first class food service, from restaurants to food and gastronomy-related companies.

Next year the BCC will have an enrollment of 400 students, 100 per course. Almost two-thirds come from Spain, and mainly the Basque Country. A quarter of this figure is international students, coming from twenty different countries. The tuition is not cheap: 8,720 euros per year. Because demand is greater than supply, in order to achieve balance, a selection process was necessary. It has its own scholarship system allowing people who have qualified, but do not have sufficient financial means to be admitted.

More than a program

The training offered at the BCC does not end with a university undergraduate degree. The Centre offers a wide range of food and food-related masters. Its current offering presents courses specializing in Innovation and Restaurant Management; Sommelier and Enomarketing; Cuisine: technique, product, and creativity; Specialization in Cooking; Restaurant and Pastry Cooking. In addition to the Center´s own faculty, some of the best chefs in Spain are participating in these masters programs. The Center also offers specialized programs for professionals, workshops, seminars and lectures and is home to all kinds of culinary events.

The didactic vocation of the BCC is not geared exclusively to the world of professional gastronomy. Home cooks and amateurs can also find a place in the wide offering of so-called courses for enthusiasts with some very unique courses: Lunchbox Cuisine, Make Your Own Cheese, Master Host, Spring Kitchen, Smoked Foods and Champagne, Cooking with Children, etc.

With less visibility, we cannot forget Basque Research, the R+D+i center associated with the BCC that develops projects and research in the field of food and nutrition. The Center’s main customers are companies in the food sector, seeking to improve products for subsequent marketing. There are three lines of research: food habits and healthy lifestyles; sensory perception and culinary research.

Therefore, the Basque Culinary Center by its own merit, has become a World University reference within the framework of gastronomy, in coherence with the international fame of its own Basque gastronomy.

Be the first to comment on "Basque Culinary Center: Cooking Studies Begin at University Level"