Two almost opposite realities merge in Basque basketball. In sporting terms, the situation is close to ideal. Not so many years ago it would have been difficult to imagine three Basque teams situated in the ACB, the Spanish Professional League. The provinces of Alava, Bizkaia and Gipuzkoa have their place in what some consider to be the toughest competition in the world, after the NBA, obviously. In the case of the team from Alava, the Laboral Kutxa Baskonia is, since more than one decade ago, a classic on the European scene, in which in recent years the Bizkaia Bilbao Basket team has begun to show its face. Gipuzkoa Basket, with a more modest budget, is currently in its sixth consecutive season in the ACB. 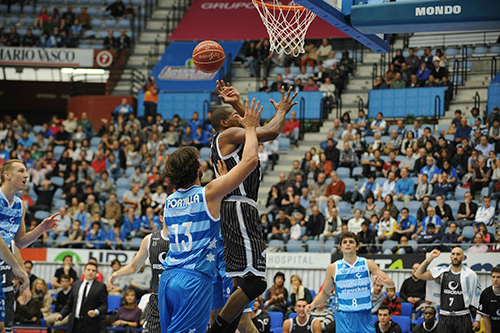 Three clubs, however, who are all looking to the future apprehensively due to the economic crisis. The basketball world, in this case in the ACB, is no stranger to the global situation. In fact, basketball at a professional level has basically been cemented in money from three areas: institutional, savings banks and construction. Thus, governmental budget cuts, the delicate situation of the savings banks and the burst of the housing bubble brought the drastic reduction of subsidies and sponsorships to professional sport as a consequence, and in this case, to basketball clubs.

This is a reality from which Basque teams are not able to escape. Currently, the Bilbao Basket team is in the most serious situation. Without a main sponsor and after the last season the Bizkaia Provincial Council, the provincial government, provided up-front all of the money agreed on for a multi-year grant, the club has acknowledged its lack of cash flow saying that it needs an amount around a half million euros to deal with immediate payments. 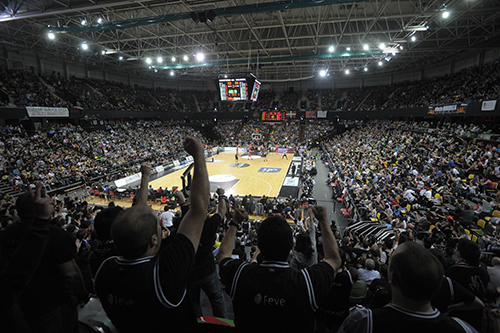 In addition to these problems, we must add the money owed to some players and technicians that are no longer on the team. Despite having a pavilion, Miribilla, recently built and that houses an average of about nine thousand spectators, the future of the project could be in the air. It is heard that different groups are interested in investing in Bilbao Basket and that the maximum shareholder, Gorka Arrinda, would need to exit as a condition to ensure that negotiations with investors end satisfactorily.

The Gipuzkoa Basket team, GBC, got a cold bucket of water dumped on it during the summer of 2012. After the best season in its history, finishing fifth and playing the Cup finals and play-offs for the first time, the club had to give up its participation in the Eurocup (second European competition) after the announcement by the Gipuzkoa Provincial Council reducing its support for the project from 1.2 million to 500,000 euros. These reductions continued last summer culminating with the ending of a contract of its main sponsor, the insurance company Lagun Aro. In this context, without a main sponsor and decreasing institutional support, the GBC stands out for its responsible management in a League in which nearly all spend what they don’t have, and it is participating with the smallest budget in its history, around three million euros. 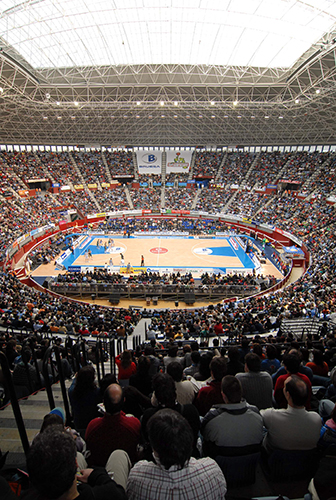 In the absence of its own Pavilion, the San Sebastian team plays in a Bullring adapted for basketball.| Photo: EL DIARIO VASCO

Despite the problems, this team coached by Sito Alonso is having a good season. Learning from last season’s mistakes, which ended with a descent (to a lower category) that in the end was not executed due to the disproportionate demands posed by the ACB on teams for ascending (the teams from Burgos and Alicante could not make the demands resulting in no ascents or descents), the GBC has created a promising roster with players who will have to prove themselves. The economic situation has also opened the door to the possibility for the club to have three players from Gipuzkoa, two of them under-20, almost an exception in this competition.

The crisis also affects the most important Basque team, Saski Baskonia. Its President, Josean Querejeta, one of the most influential men in European basketball, threw his own SOS this summer. “Without aid we cannot compete. We have had to reduce the budget significantly and do not know if we will have to reduce it further.” In particular, the Laboral Kutxa team has a budget of around eleven million euros, considerably less than the previous seasons. 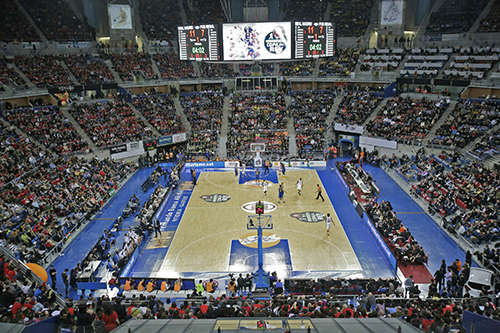 The consequence of that reduction is a logical loss of competitiveness. Accustomed recently to fighting for everything, the team from Vitoria-Gasteiz won its last title, the ACB League, in the 2009-2010 season, sinking a basket at the buzzer with a foul called for an additional free-throw by Fernando San Emeterio. Players like Splitter, Scola, Calderón, Oberto and Macijauskas have given way to new blood. Today, with the majestic Buesa Arena pavilion, holding fifteen thousand spectators and recently renovated, the Baskonia looks from afar at the two giants, Barcelona and Real Madrid, teams who have felt the economic crisis less thanks to their belonging to two powerful football clubs and also at the rest of the European clubs who they used to rub elbows with in the Euroleague. Although this season the team coached by Sergio Scariolo has managed to get into the Top 16 of the continental competition, their options to return to a Final Four seem increasingly remote.

Teams from lower categories are also doing their best at navigating in the complicated economic situation. In “LEB Oro” (second division Spanish basketball competition), the Planasa Navarra team competes with one of the lowest budgets of the League. In “LEB Plata” (third division), the long-time team Askatuak of San Sebastian, with players almost exclusively home-grown, has had serious difficulties in dealing with unreasonable demands imposed by the Spanish Federation to be able to compete. Similarly, the Araberri of Vitoria-Gasteiz and the Iraurgi of Azpeitia (Gipuzkoa) have been on the verge of not being able to compete. The Bizkai Santurtzi is also trying to make its mark in the bronze category. Meanwhile the training and development programs are trying to keep up their excellent work in an increasingly precarious reality.

The relationship between the sporting and economic aspect is reflected again in the women’s teams. The Women’s League, first Spanish division, has two Basque teams, the UPV Gipuzkoa and Bizkaia Galdakao. Both clubs have ascended to a higher division last summer. In the case of the UPV, they have done so with a roster of young Gipuzkoan players who have grown together with the project for years. 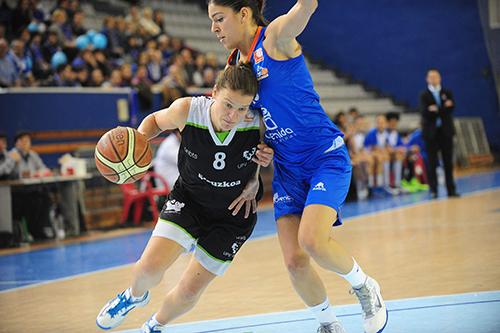 This sporting situation contrasts with a very complicated economic setting that has resulted in the disappearance of the most important Basque women’s team in recent years, the Guipuzcoan Hondarribia-Irun, a team that had participated in European competition several times and that has not been able to meet the requirements to participate in the women’s League.

“In recent years, 90% of the budget was public money but neither I nor the Board of Directors were able to apply pressure or claim more funding. We have a social conscience and know that there are people in great need,” stated the President Leire Aramburu in the press conference that announced the ending of the team.

Ultimately, Basque basketball is living in a sports setting that was unthinkable just two or three decades ago. The number of teams, elite players and young people practicing and training for this sport is rapidly growing. However, the struggle to cope with the economic crisis is the main day-to-day challenge of all the clubs.

This Is an Indie World