The Northern Basque Country, made up of the three Basque provinces situated in the French territory (Lapurdi, Baja-Navarra and Zuberoa), has not had its own institutions since the French Revolution of 1789, which resulted in the “abolition of privileges”, i.e. in the disappearance of the existing institutions until then: the “Biltzar” or provincial assemblies. The efforts of the Basque Deputy, Dominique Joseph Garat, which called for the creation of a Basque territorial collectivity (or ‘department’ in French), was not taken into consideration in the parliamentary debates that took place in the National Assembly in 1790. The claim for institutions in that territory faded until 1836 as well as the request made by the Chamber of Commerce and Industry of Bayonne to form a territorial collectivity, although the motivations of its promoters were essentially economic. 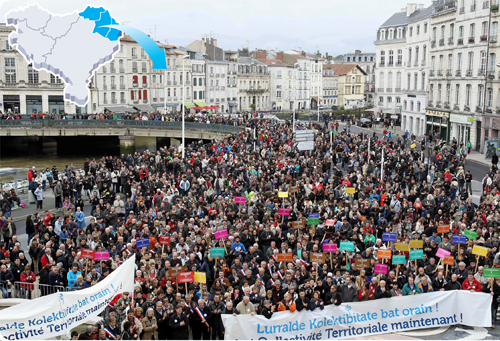 Demonstration in Bayonne on June 1, 2013, calling for a territorial collectivity | Photo: EL DIARIOVASCO

It won’t be until the 1970’s that this institutional claim appears again in the Northern Basque Country because of the rise of the Basque Nationalist movement on both sides of the border, the imminent end of the Franco regime and the expectations generated by the possible economic opening of the southern Basque Country. In fact, the first demands of an institutionalization of the Northern Basque Country came from both the Nationalist movement as well as the business world, which resulted in the creation of the partnership for a new department. This claim had a political significance since, in exchange for support of the candidacy of Socialist François Mitterrand for the French presidential elections of 1981, Nationalist formations succeeded in that the latter included the creation of a Basque Department in its election manifesto although the promise was not fulfilled.

Because of the rejection of the central Government in recognizing the institutional demands of the Northern Basque Country, mobilizations and initiatives multiplied to give this territory a specific institution: in 1994, Basque Deputy Michel Inchauspé proposed to the national representation the creation of a Region of the Countries of Adour composed of a Basque Country department; in 1996, 93 of 151 mayors of the Basque Country voted in favor of a Basque department; in 1999, more than 12,000 people demonstrated in Bayonne to lay claim to the creation of a Basque department.

This mobilization led authorities to rethink their strategy and shift from a rationale of confrontation to a rationale of cooperation. In this context we find the Basque Country 2010 forecast in 1993, the Scheme of Management and Development of the Basque Country in 1997, and its contractual nature in the specific Basque Country Agreement in December of 2000. In the same way, “quasi-institutions” were created such as the Development Council and the Elected Officials Council of the Basque Country. This change was also reflected in amending the legislation with the adoption of the Voynet Law (1997), which provides for the establishment of “countries”, which include the Northern Basque Country. This law recognizes the territories which, in addition to having a cultural, linguistic, geographic or economic unity, enjoy a territorial project, allowing them to develop and implement public policies of their own.

If this change of strategy led to the establishment of a new form of governance based on the search for consensus, it did not decrease the institutional claim but rather had the opposite effect, because in 2001, the Association for a Government of the Basque Country was created; in 2002, 92 municipal corporations were in favor of the institution; in 2005, 63% of mayors were in favor of taking the matter to a public consultation; and between 2006 and 2009, a petition campaign resulted in the collection of 32,050 signatures in favor of the organization of the consultation. Currently, although there is a broad consensus among citizens, the productive fabric and the political class of the Northern Basque Country on the need to provide this territory with its own institution in general and with a territorial collectivity in particular (which would fulfill the powers of a French department adding 8 additional powers), the central Government rejects any institutional recognition.

Manuel de Gotor: a Basque on the Conquest of the Interior World