On September 25, 1992, the Iñurrategi brothers, Alberto (Aretxabaleta, 1967) and Félix (Aretxabaleta, 1966-Gasherbrum II, 2000) became the youngest mountaineers to climb Everest without the help of oxygen. In the photographs of that historic day in the Himalayas you can see both of them wearing garments by Astore, the brand based in Arrasate (Gipuzkoa), leader in the sportswear sector of the Basque Country and one that for years has equipped soccer (football) clubs such as Real Sociedad, Osasuna, Alavés, Eibar and the Sporting of Gijón. 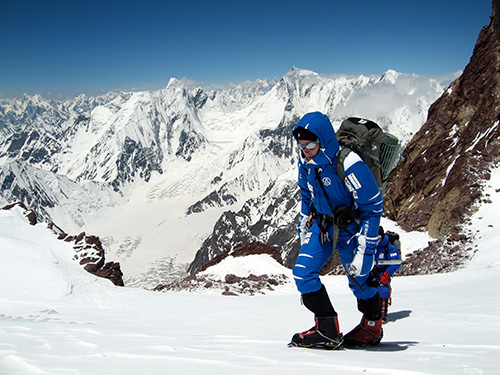 Alberto Iñurrategi ascending the summit of Gasherbrum II, in the Himalayas, in 2010. PHOTO: TERNUA

The Iñurrategis, an essential duo for understanding the brilliant trajectory of Basque mountaineering at the highest summits of the world, were not clad from head to toe on this bright day with Astore gear. Their down-filled gear was from a different supplier since the Gipuzkoan Company did not offer this type of clothing at the time. From that point forward, all of the peaks achieved by the Iñurrategi brothers (first together and then Alberto on his own) and Juanito Oiarzabal, the sixth man to climb the fourteen eight-thousanders of the planet have been conquered with the stamp of Astore and Ternua, both grouped under the denomination of the Basque company, Arrasate Import.

With an emerging market opening as suppliers for the outdoors, in 1994 Astore created the firm Ternua (first under the Terranova brand by Astore), inspired by the entrepreneurial and adventurous spirit of Basque whalers of the 15th century who sailed to Newfoundland (“Ternua” in Basque), motivated by necessity. Like those fishermen, seeking their economic livelihoods in extremely harsh climatic conditions, in the case of high mountain climbing, there was also a need for functional and comfortable clothes that could deal with the most extreme situations, but also to respond to the growing market for sports apparel in the open air (mountaineering, climbing, skiing in its different modalities or trail running.) 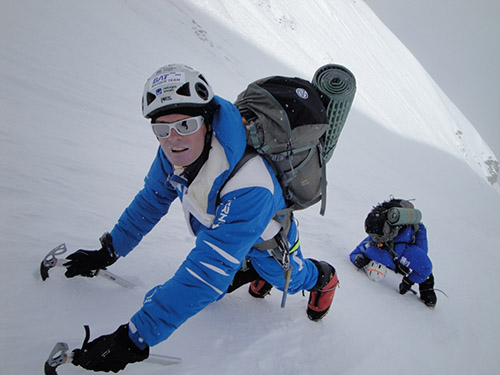 Alberto Iñurrategi and Mikel Zabalza scaling the Japanese corridor on their expedition to Everest in 2009. PHOTO: JUAN VALLEJO

The design, quality and the remarkable acceptance achieved by the sporting line of Ternua with its fans of the outdoors, coupled with the great mountain tradition existing in the Basque Country and the worldwide notoriety it reached with the help of the epic achievements of the Iñurrategi brothers and Oiarzabal, allowed the company to take off and expand without the backing of Astore. During the last decade, the mountaineering sector has experienced a progression which allowed Ternua to put a major dent in the competitive sportswear market, monopolized by multinationals such as The North Face and Columbia.

Ternua has earned a prestigious reputation as a brand based on five principles: the quality of its garments, confidence in its technical performance, working with renowned fabrics and materials (Gore-tex®, Polartec®), a well-thought-out design and fidelity to a philosophy which is reflected in its motto captured from an old Basque proverb: “Non gogoa, han zangoa” (“Wherever your thoughts go, your feet will follow”). “Our philosophy and our DNA are perhaps our most important differentiating factors. We firmly believe that we have a special brand, deeply rooted, a true story based on real events, on which we have built a philosophy and a way of being which we are very proud of. We attempt to apply this philosophy across all our activities, at all levels: our products, sales, and communication,” explains the company from Arrasate, which is also the epicenter of the cooperative movement in the Basque Country.

Because the way that Ternua understands mountain climbing is translated directly to its garments, designed to protect the alpinist from climatic conditions as extreme as can be, thrashing winds, rain or cold. This hallmark has helped gain the trust of users, customers and businesses, and obtain several prestigious international awards due to the technical performance, comfort and safety of its products.

In the last fifteen years Ternua has won eleven awards at the Fair for Outdoors in Friedrichshafen (Germany), the most important event for the sector in Europe. Awards for Excellence (the latest for this year’s down jacket named “Jannu”) has contributed to the Basque firm earning a presence beyond Basque borders, where it is a reference both to those who practice mountaineering and for those who wear its street clothes. The awards have come not only because of the comfort and design of its articles, but also because the Gipuzkoan Company has developed its own fabrics which have placed it as a valued brand around the world. In a sector in constant technical evolution, the R&D+i Department works hand-in-hand with advisers like Iñurrategi, testing in the field all the innovations that are developed in the Ternua labs in Arrasate. 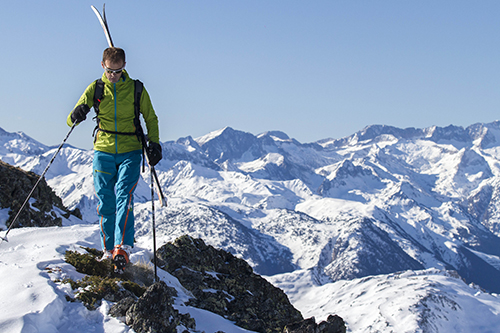 After its introduction into the international market with the advice and backing of Astore, Ternua continued to expand its growth of the brand, initially close to its place of origin and then into international markets, primarily as a result of its participation in the 2001 Ispo Fair in Munich (Germany), where it received an award for developing the safe sail system. In a context marked by the strong competition in the sector, the Basque textile company first focused on Asian markets, and currently it is well-established in Japan, Korea and Taiwan. In Europe, saturated with outdoor apparel brands, it has a presence in Germany, France, Italy, the Czech Republic, Poland and Austria.

Along with its growth, Ternua has been positioning its brand image in association with athletes (mountaineers, climbers and mountain runners who are references in their countries of origin) and has grouped them into what it calls “Friends”, friends to the company like Alberto Iñurrategi, the Japanese Kazuya Hiraide and Kei Taniguchi (the first woman to win the prestigious Piolet d’Or). In the Basque Country, the notoriety of the brand shows also in the sponsorship of television shows like El Conquistador del fin del mundo, the widely popular program on the Spanish channel of Euskal Telebista (Basque public television). In addition, it maintains strong commitment to sustainability which has led the Company, since 2009, to work with products causing the least impact on the environment in accordance with the bluesign® system of approval, which encourages the textile industry to be governed by more stringent environmental standards.

And, not surprisingly, given that its logo represents the tail of a whale, as of 1994, it is the sponsor, in a symbolic way, of four cetaceans through the Association of Whale and Dolphin Conservation (WDC).

“Euskalkultura.com” The Informative Reference on the Basque Diaspora

Irizar: From Ormaiztegi to Five Continents

Be the first to comment on "TERNUA, A Basque Garment on Top of the World"