Literature was already literature avant la lettre. In other words, oral literature exists since the very beginning of human culture. The origin of Basque language remains unknown; at any rate, its actual mystery is not its origin, but its survival, as Koldo Mitxelena stated. It is hard to find a true and scientific reason for that even if some scientists have already tried to seek one. Some say that it survived because of the geography of the Basque lands, isolated by forested mountains. However, researchers like Juan Carlos Etxegoien “Xamar” deny that hypothesis: “We need take no more than a quick look at history to see that Euskal Herria (the Basque Country) has been an important place of passage for the whole of Western Europe” (Orhipean, The Country of Basque, 1992). Either way, the truth is that Basque language is still alive, and even though its written literary production has been quite scarce and poor, Basque culture is extremely rich and prolific in oral literature. Proof of this is with the excellent book Anthology of Oral Basque Literature, published in 2013 by the Etxepare Basque Institute and written by Xabier Paya. 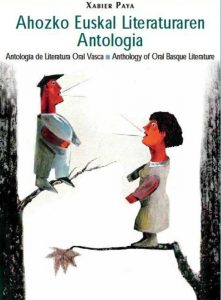 Oral performances always fly with the wind, if they are not recorded. Precisely, Joxerra Garzia wrote the prologue of the Anthology of Oral Basque Literature, entitled “Not gone with the wind”; equally, he made the preliminary classification that Paya, later on, followed and developed in his anthology.

They divided Basque Oral Literature into eight genres. In this article just the following ones will be mentioned: the epic and lyric genres, bertsolaritza (improvised and sung poetry), the popular theatre, and the didactic genre. As Igone Zaballoa from the Labayru Institute writes in her article Literatura oral vasca, the first evidence of oral Basque literature is from the sixteenth and seventeenth centuries; those passages collected songs and chronicles that referred to events of the fourteenth century.

The historian Esteban de Garibay in his Compendio Historial de las Crónicas (1571) included some verses of an epic song which made reference to the Battle of Beotibar.

Its translation to English:

After a thousand years,

in Beotibar they met the Navarrese,

Following the definition given by Paya in his book, “bertsolaritza is the art of measured, rhyming, sung discourses. The performance occurs when the bertsolari, the specialist in this art, improvises a sung bertso (a poetic speech, about a specific theme or topic) that has been suggested. The artist must follow strict rules concerning meter and rhyme and, aside from the case of written bertsos (the diffusion of which is traditionally carried out on paper) he or she has only a few seconds between acknowledging the theme or topic and starting to sing about it”. There is no evidence about the beginning of these performances among Basques; anyway, the tradition of bertsolaritza is old, at least from the period of improvising maidens of the fifteenth century which was mentioned by Garibay. 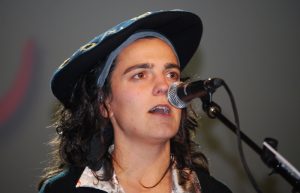 In the twentieth century, during the early years of Francoism, bertsolaritza was prohibited in Spain, as was the use of the Basque language. This form of improvising poetry was generally linked to rural and all-male environments. After the dictatorship, through the hard work of cultural movements, bertsolaritza gradually recovered, and gained popularity among the new Basque generations. Nowadays, it is the most popular form of art carried out in the Basque language, and it is generally considered a rich and modern cultural phenomenon. In this regard, the 2009 Grand Bertsolari Championship had an enormous influence on the development of this art form: specifically, for the first time, a woman won the championship. Paya suggests that “the bertso sung by Maialen Lujanbio after she was named champion, is an excellent synthesis of her triumph and of contemporary bertsolaritza.”

Wilhelm von Humboldt stated in 1801 that the Province of the Northern Basque region of of Zuberoa was “the only area which still presents popular theater in the Basque Country.” Always following Paya’s classification, the theatrical genre, or popular theater, refers to “all dramatic performances organized for and by the public. These shows take place outside of theaters, in streets, town squares, and open fields. The most well-known examples of this genre are the masquerades, pastorals, and burlesque theater.” Basque literature expert Jon Kortazar points out in his book Euskal literaturaren historia txikia (Published by Erein, 1997) that even though pastorals have insistently been compared with French mistères, Basque ones are unique in that they are rural adaptations. Popular theater has preserved some aspects of those representations, but always blending them with current issues, in order to be striking and interesting for the local public. 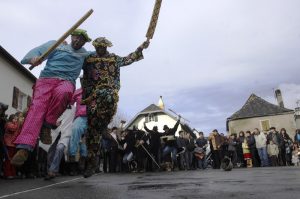 The didactic genre is fundamental in the development of Basque culture. Paraphrasing Paya, if one of the principal functions of oral literature is the transmission of characteristics and customs of a community, the concept of norms of behaviour and education form a vital part within the aspects that share this function. The didactic genre in particular carries out this objective; therefore, we find that women have played a crucial role in Basque language transmission, as well as in literary creation, both oral and written, even though most of their works are known as anonymous. In conclusion, the Basque language is still alive for many unknown reasons, but at least one thing is clear: speakers still find it useful and beautiful. Its survival is still a huge mystery; nevertheless, we can obviously state that its oral literature as well as its strong orality have been key factors for it all.

Ion Olano Carlos is a Writer, Basque language teacher and Journalist. He graduated in Journalism and Media Studies at the University of the Basque Country, and he pursued Literary Studies in Barcelona and Amsterdam. He has collaborated in several Basque media.

Be the first to comment on "Oral Literature: the Key to Basque Language Survival?"