With just fifteen years operating, the Higher School of Music of the Basque Country, Musikene, located in Donostia-San Sebastián, is an international reference. Last year it received almost three hundred enrollment applications for its eighty positions for the 2016-2017 course. Students from all over the world want to enroll in this increasingly popular center because of its prestigious and highly specialized faculty.

Russia, Mexico, Norway, Germany, Brazil, Denmark, Finland, England, France… These are some of the home countries of the students studying at Musikene, the Higher School of Music of the Basque Country. Since it opened its doors for the 2001-2002 academic year with the help of the Basque Government, the prestige of this academic center has done none other than grow, to the point that last June specifically, 290 students tested for access eligibility for the 82 slots offered for the next course. This is the highest number of applicants since Musikene began fifteen years ago. So, why this huge success?

“Musikene has become very attractive because of the big names of its teachers who are specialists in each of their subjects,” Miren Iñarga the Director of Musikene sums it up in a sentence. In fact, this was one of the major premises in its design: to have active musicians and experts in each of the subjects, with teachers who are renowned professionals in the imparted fields. 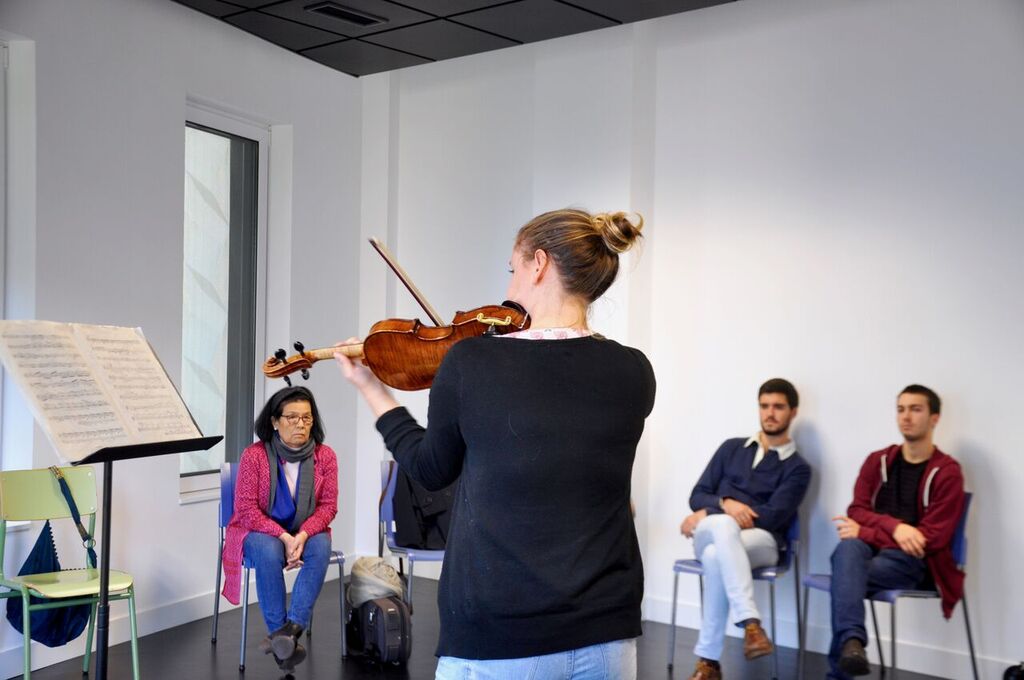 The teaching staff for this center, specifically, is continuously involved in the profession as performers, debuting their own new pieces or directing. “They can provide not only the transmission of knowledge, but also the experience and emotions that a musician requires when he or she is before the public, making transitions to big orchestras, festivals and venues,” says Iñarga. For example, violin students may have one professor for violin, one for orchestral repertoire, another for string quartet and another for chamber music.

This is a feature not so common in higher music schools in Spain, since it is quite normal to find faculty giving a high number of hours and topics per day. “Here, in many cases there is usually a professor teaching a class to a single student; there are teachers who come and impart only two hours per week. It’s very enriching to have true specialists in each of the subjects, so that the students can benefit from different sources, making the knowledge acquired much richer,” explains the Director. If this weren’t enough, our faculty not only is known in Spain, but also around the world.

The number of students for undergraduate studies with various specialties amounts to 312, plus 28 additional students of the different master’s degrees and specialization areas, for which there are a total of 168 teachers. “Every year we end up having approximately 80 students per level, for which we maintain 82 slots for first year students annually. “In addition, our drop-out rate is extremely low: last year it didn’t even reach 4%, because the students coming for entrance exams have prepared extensively, investing lots of study hours.”

In fact, studying at Musikene tends to be one of the primary objectives, that is to say, getting the opportunity to study with teachers in centers that are a reference for them. “This is why it is typical that students do auditions and testing in several centers, but, fortunately, one of their favorites usually is Musikene,” Iñarga says proudly. This testing takes place in the last two weeks of June. “It’s a special time, but at the same time very difficult with applicants coming with their families, some from far away.”

The school year begins in mid-September and concludes in late May. Degree studies, specifically, are here for a duration of four years and are adapted to the Bologna Process, namely the European higher education area, with a total of 240 credits and a series of mandatory as well as optional subjects. Once complete, students can opt to continue with different master’s programs.

The Student, the Best ‘Ambassador’

The school’s fame is widely spreading mainly due to its students, who work as the best ‘ambassadors’. “Fifteen years of experience isn’t much for a Higher School like this one, however, our students, who go out into the world to audition for master’s programs in prestigious European or American schools, are often accepted and considered in high regard,” says Director of this unique music school of the Basque Country.

In fact, Musikene graduates have already become professionals performing in orchestras across Europe, such as the Berlin Opera, the Berlin Philharmonic Orchestra, the Milan Theater Orchestra, the London Symphony as well as the Zurich Opera or Frankfurt Opera. The School also has alumni who have currently premiered their works in great orchestras or are teaching in conservatories and music schools. “This way we have already begun to see our musical ‘grandchildren’, students of our former students,” she says.

Another success factor is that the school receives annually three times the amount of applications for Erasmus which can be accepted, “…from students, moreover, of well-known centers such as the Sibelius Academy in Helsinki and the Royal Danish Academy of Music in Copenhagen.” In fact, this academic Center has currently signed 46 agreements with 17 European countries. All of these things have made Musikene a renowned center abroad. That is why Iñarga admits: “We have to be proud to have raised in such a short time such expectations for future students.”

Musikene offers an extremely attractive curriculum, since it covers the needs of today’s musician comprehensively: performance, body techniques, body awareness, a wide range of elective courses… “Going from the more technological approach of the instrument to body techniques; but also some of a more fun nature, but that also help with body expressivity, such as dance or dramatic interpretation; or others that teach them basic skills for the future: learning about the professional industries, copyright, intellectual property, how to write a resume, how to use media…,” Iñarga underscores.

In addition, since Musikene places importance on the fact that students can perform together, there are several groups of Chamber music, Orchestra, band and ensemble for classic studies, as well as big band for jazz. “Students are expected to perform mandatorily in these groupings, which work with renowned guest conductors, who come to direct them and are handled like a professional project, with directors of the stature of Antoni Ros-Marbà, Alberto Zedda, Johan de Meij, Arturo Tamayo, Pascual Vilaplana or Eduardo Portal. Every year we bring different ones,” she says. And if that’s not enough, we also have an instrumental workshop, a laboratory of ideas where works by students are premiered. 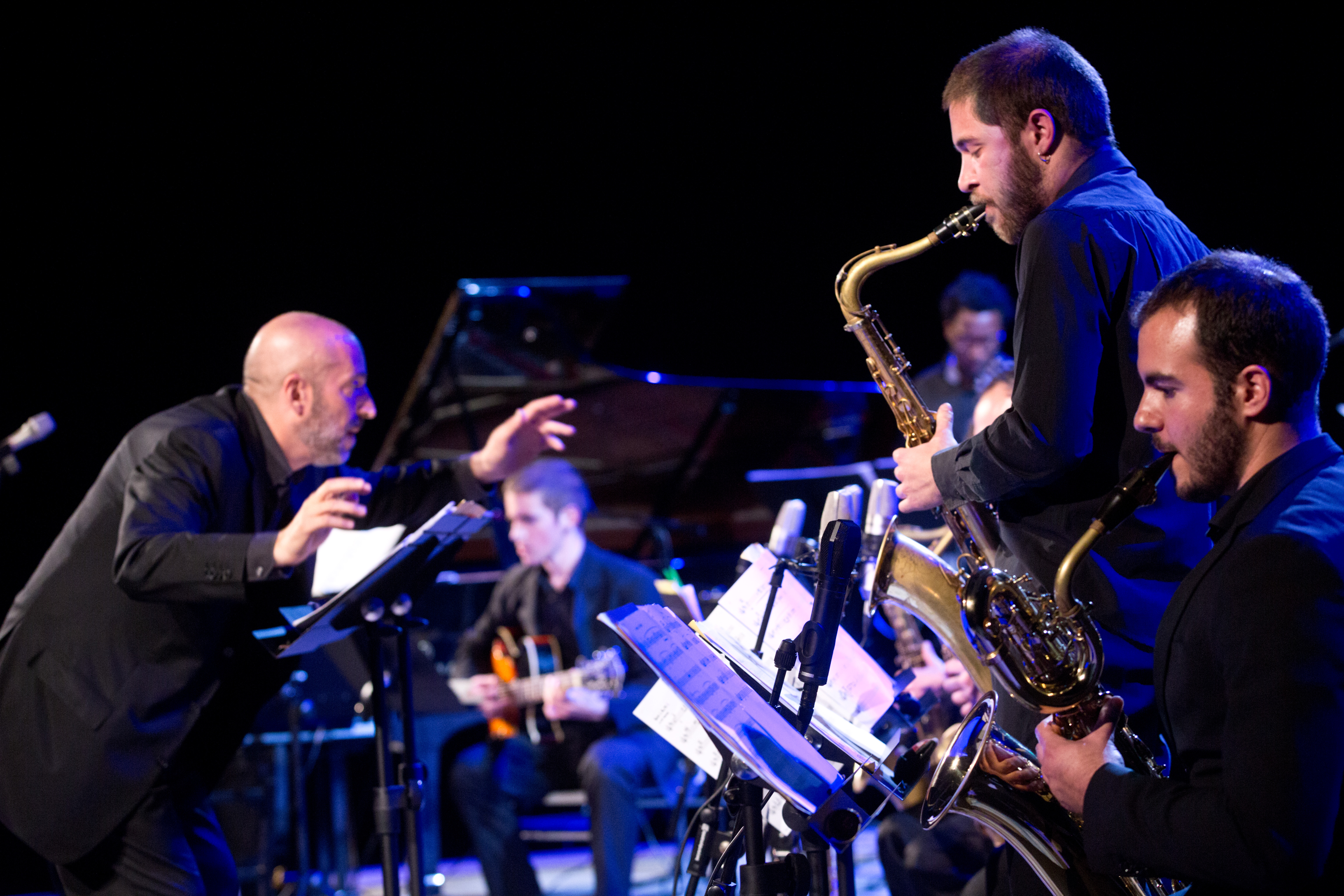 The Big Band, another of the Center’s creations. Musikene

New Facility in the University Area

A brand new building for Musikene was designed by GAZ Arkitektoak of Bilbao and was inaugurated in September of 2016 near the San Sebastian University area. “This year we inaugurated the new building, the definitive seat of Musikene. It’s been a staggered transfer of all academic, computer and instrumental material which it houses.” This new building has 13,096 square meters, including a library, auditorium, 39 practice rooms as well as 55 instrumental classrooms, 10 theory classrooms, one recording studio and another electro-acoustic room.

The building has also received several architectural awards, including the prize awarded by the Official Association of Basque-Navarre Architects (COAVN). The building has also been selected for the European Prize Mies van der Rohe. “Because technical and aesthetic solutions have been found to achieve an avant-garde, architecturally striking center, but also on the inside, a very functional space,” Iñarga explains. The building also appears in several monographs of architecture as one of the most important public buildings in Spain.

As a main feature, we must indicate that all classrooms and rehearsal rooms have natural light, its 420-seat auditorium – with a huge stage – is very versatile, customizable, which offers a multitude of options enabling the organization of various events. In fact, in its first two and a half months of operation the building housed 38 events. “They have rented the auditorium for performances of the Cultural Capital of Donostia/San Sebastian, San Sebastian piano competitions, and the Euskadi Symphony Orchestra has played there as well. Therefore, it is not only generating academic activity, but also activity as an auditorium with its own programming,” she explains. 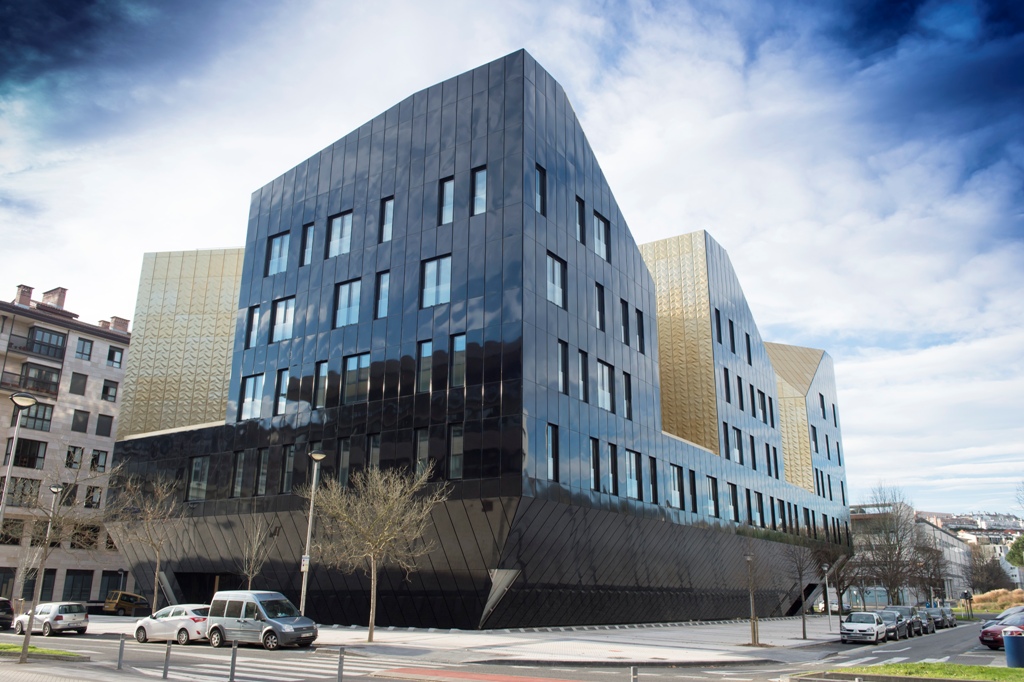 The new Musikene building, whose award- winning architecture has been highly praised. Musikene

Musikene started in the Miramar palace in San Sebastian as a provisional venue for fifteen years. “It is a wonderful place because of its great views, an emblematic place where the Spanish royalty lived, but for the same reason it could not undertake any remodeling.” Not only did it end up being too small, it did not meet the needs for a higher school of music”. Therefore, in addition to the Miramar Palace, there have been several locations used in San Sebastian for classes, scattered across different places throughout the city during its fifteen-year history, before moving, in 2016, to the current award-winning building where Musikene, this Higher School of Music of the Basque Country of such worldwide notoriety, is today.

Be the first to comment on "Musikene, the Successful Higher School of Music of the Basque Country"