The hundredth edition of the French bike race is taking place these days.  The first Basque who took part in it was Vicente Blanco, a cripple who pedaled from Bilbao to Paris to join the first stage.

In 1910 the Tour organizers announced that it would go through the Pyrenees for the first time, through steep, dirt trails used only by sheep herders, in a region where even bears are spotted. A quarter of the inscribed riders erased their names. Meanwhile, in Bilbao, Vicente Blanco insisted on participating.

Blanco had two stumps for feet. When he was 20 years old and working in the steel factory “La Baskonia”, an incandescent steel bar pierced his left foot.  A few months later he returned to work at the “Euskalduna” shipyards and gear teeth of a machine crushed his right foot. He could not walk well at all but he could fly on a bike. 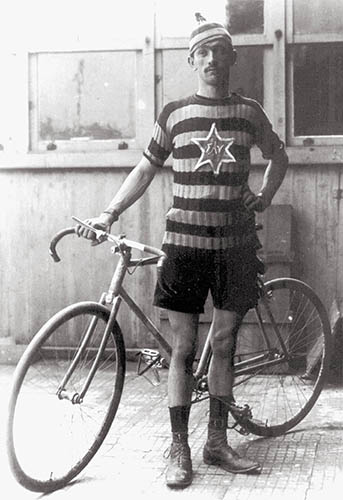 Blanco won the most prestigious races of the era (Pamplona-Irún-Pamplona, Tour of Catalonia, Irún-Vitoria-Bilbao-Irún), including becoming champion of Spain in 1908 and 1909, with the wool t-shirt of the Bilbao Athletic Federation.  At age 26 he decided to ride from Bilbao to Paris to take on the Tour de France.

“Why not? “, he explained years later.  “That´s how I went everywhere, on a bike, the same way to Barcelona or to Valencia.  And to Paris all the better, because the French roads were better taken care of”.  A year earlier, a group of fans of the San Sebastian Cycling Club had come to the stage finishing in Bayonne and had offered a prize of 25 pesetas to the first non-professional cyclist that crossed the finish.  Those Basque supporters from San Sebastian had dinner in Bayonne with the organizers and they encouraged them to allow a Basque rider to participate in the Tour.  Manuel Aranaz, Vicente Blanco´s sports mentor, let the idea brew and convinced the Cripple.

The Cripple pedaled from Bilbao with a sack of stale breads and arrived to the French capital on July 2, 1910, exhausted, hungry and disoriented. The Tour began the next day.  He had the address of a Spanish mechanic who worked at the “Alcyon” bicycle factory, who gave him a new bicycle and accompanied him to the headquarters of L’Auto, where he picked up his number, 155.  He then had dinner to regain whatever strength he could, just spent across the thousand kilometers of travel by bike. He slept poorly and got up very weak.  At the start he saw at close range the champions of the time:  Lapize, Faber, Cruppelandt. Blanco had declared in Bilbao that those big names would not frighten him: “They push pedals just like I do.”  But, it also seemed that they could push pedals faster:  the race started, the favorites fired out of the starting line and Blanco did not see them again.  Not even on the following day. The cyclist from Bilbao did not last even a day on the race.

Although he did not appear on the classification of that stage, he said that he had reached the finish at Roubaix. Outside the time limit, of course. He attributed the failure to break-downs and falls, but, above all, to a key circumstance: “I could not do anything against those well-fed beasts.”

Hunger was an obsession for these pioneer cyclists. So when Blanco returned completely worn out from the Tour, the managers of the Biscayan Athletic Federation and Athletics Club of Bilbao knew what the best tribute for their cycling hero would be: a banquet. The reporter, Julián del Valle, describes a meal that was organized in the Biscayan town of Balmaseda:  opening the pallet with a Biscayan paella – Vicente served “two huge plates with abundant chunks”-, followed with hake in the classic green sauce – “He wolfed down four pieces and mopped the sauce clean.” – as well as two half-kilo steaks with peppers. On to the desserts, when they brought out fruit he rejected it saying: “Fruit is for monkeys”. Satisfied, he rolled a cigarette before his coffee. Suddenly, the waiters appeared with overflowing earthenware dishes and Blanco’s gesture froze. He patted his bloated stomach and stammered somewhat sobbing: “Man, there is no right… you should have warned that rice pudding was coming!”

Basque Language on the Web: Making an Impact

The Far East of Judas Arrieta

Be the first to comment on "Vincent ‘the Cripple’, the First Basque in the Tour de France"